Earlier in the day, search operations revealed the existence of an illegal explosives factory that was promptly sealed. 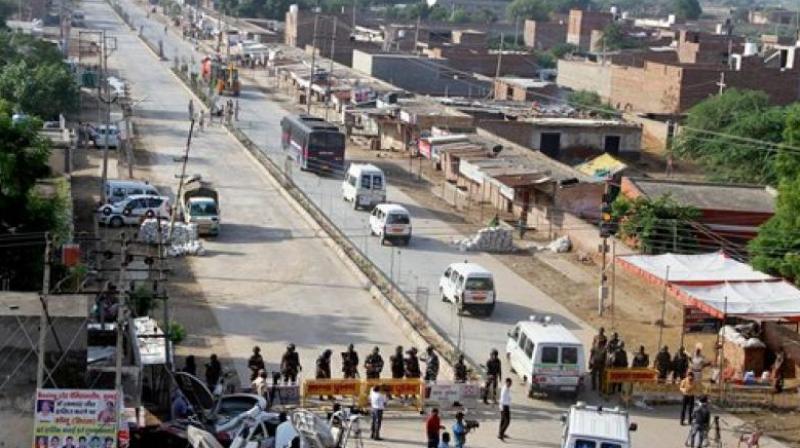 Vehicles of the search team move towards Dera Sacha Sauda on the second day of the search operations inside the Dera headquarters in Sirsa on Saturday. (Photo: PTI)

Sirsa: Ongoing search operations at the Dera Sacha Sauda Headquarters in Sirsa, Haryana, on Saturday revealed the existence of a window-like path in Gurmeet Singh's Derawas, which leads to the Sadhvi Niwaas.

Deputy Director (Public Relations) of the Haryana Government Satish Mehra said, "The search operation started at nine in the morning. We found a window like path in Baba's Niwas. The path leads to the Sadhvi Niwas. It had a window-like structure."

Mehra further said that a box, which contains AK-47's magazine, has also been found in the small dera.

Earlier in the day, the search operations revealed the existence of an illegal explosives factory and firecrackers, which were promptly sealed.

"Some children have been rescued, one is from Uttar Pradesh and the others from Kaithal. They have been handed over to the district child protection officer," Mehra added.

He also said that unlabelled medicines have been found on the premises and handed over to the district administration.

Mehra confirmed that search operations would continue till the evening and action would be initiated thereafter.

On Friday, a computer, hard disks and cash were recovered and are being examined by a forensic team, called in from Roorkee.

Heavy security has been deployed in Sirsa and surrounding areas to allow the search operations at the Dera headquarters to go on smoothly.

41 companies of paramilitary forces, four Indian Army columns and Haryana Police contingents from four to five districts are manning 16 checkpoints. A SWAT team and one dog squad have also been deployed.

A bomb squad will also accompany the officials and security personnel inside the headquarters in Sirsa.

Ten companies of the Sashastra Seema Bal (SSB), along with the Haryana Police, have been deployed at the Shah Satnaam Chowk.

A curfew has also been imposed in areas surrounding the Dera and no relaxation given in these areas till the search operation is on.

Earlier on September 5, the Punjab and Haryana High Court gave orders to conduct a search operation in the Dera Sacha Sauda headquarter, under the supervision of a judicial officer.

The police later seized and sealed all weapons.