India   All India  09 May 2018  Jinnah's portrait symbolises partition of India, should be removed: Union minister
India, All India

BJP MP Satish Gautam objected to portrait of Jinnah hanging at AMU for decades which sparked a huge row. 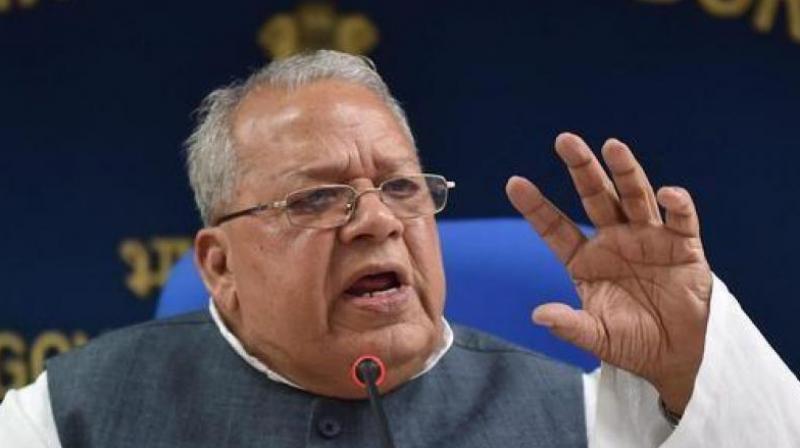 'Indian Muslims, in general, are patriot.' 'Only handful of people try to misguide the Muslims, however, it is not going to make any impact on Karnataka elections,' said Mishra. (Photo: File/PTI)

Mathura: Former Union minister and senior BJP leader Kalraj Mishra on may 9 said that the portrait of Mohammed Ali Jinnah should be removed from the Aligarh Muslim University as the Pakistan founder symbolises the partition of India.

“Jinnah symbolises division of India, as he incited people of undivided India, resulting in a massacre that has taken the life of thousands of people,” Mishra told reporters in Vrindaban.

On Congress leader Mani Shankar Aiyar's comment that V D Savarkar was the first proponent of the two-nation theory, he said, "Aiyar should not be taken seriously because he had earlier made such statements.”

At an event in Lahore, Aiyar had reportedly said V D Savarkar was the first proponent of the two-nation theory and invented the term "Hindutva" to create a religious divide in the society. The former Union ministers remarks come at time when Pakistan founder Jinnah's portrait at the Aligarh Muslim University (AMU) has sparked a huge row.

The row erupted last week when BJP MP Satish Gautam objected to the portrait of Pakistan founder Muhammad Ali Jinnah, which has been hanging on the walls of the student union office for decades.

On May 2, AMU students clashed with the police demanding action against the Hindu Yuva Vahini protesters who were detained at a police station but allegedly allowed to leave after some time. The police said two youths were arrested later.