The BJP chief said the NDA government was quite decisive and focused on its foreign policy and stand against terrorists. 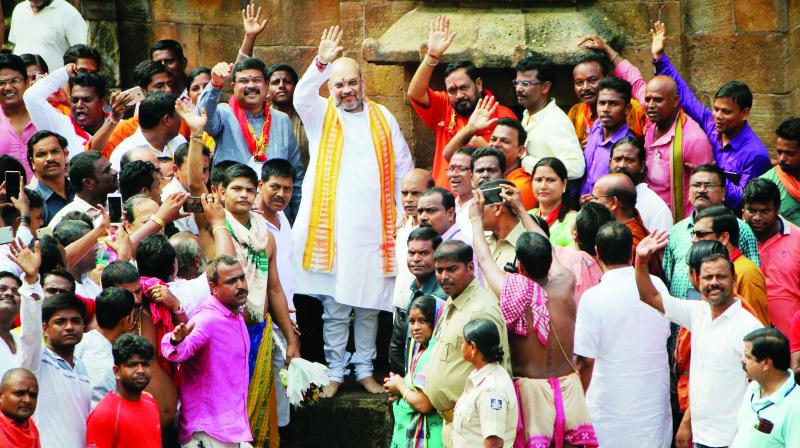 Mr Shah, who is on a three-day trip to Odisha to strengthen the party organisation, said Prime Minister Narendra Modi had walked the talk with regard the party’s promise to bring economic prosperity, curb corruption and fighting terrorists. “The government had promised action against corruption, fighting the anti-national forces, controlling the spiraling prices of essential commodities and bringing economic prosperity to the country. During the previous government, the economy had come to a standstill; the country battled price rises and there was no clear-cut foreign policy. Now, we are one of the fastest growing economies in the world. Prices have stabilised and India has made significant strides in all parameters of development,” he said.

He informed that the Modi government’s fight against black money had started paying results with countries like Cyprus, Singapore and Mauritius cooperating with the Indian agencies in locating illegal wealth parked there. The demonetisation move and detection of nearly two lakh shell companies were also part of the drive against black money, he added.

The BJP chief said the NDA government was quite decisive and focused on its foreign policy and stand against terrorists. “The surgical strikes against terrorists in the enemy’s land, our diplomatic victory in the Doklam standoff with China and Prime Minister Narendra Modi’s forward-looking foreign policy have enhanced the country’s reputation at global level,” he observed.

To a query if acche din (good days) had really dawned under the Narendra Modi regime, Mr Shah said the victories in states like Uttar Pradesh, Uttarakhand, Manipur, Maharashtra, Assam and Jharkhand that went to polls post 2014 generals clearly proved that people had “seen and experienced” good governance under the Modi government.

“Those who complain that achce din has not come, they appear to have grown old and hence cannot see the good days heralded by the Modi government. The youth and common people have already tasted the fruits of achhe din which resulted in our overwhelming success which went to the polls after 2014 general elections,” Mr Shah said.