On Tuesday, the board had notified that it has rationalised by up to 30 per cent the syllabus for classes 9 to 12 for the academic year. 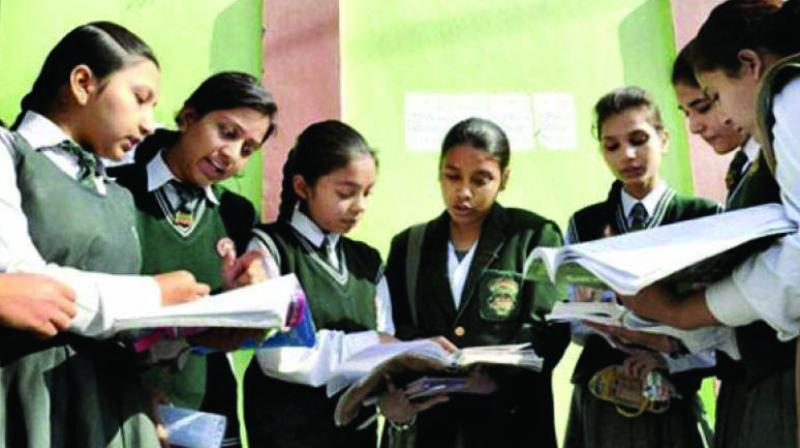 The CBSE's move to rationalise its syllabus by dropping certain chapters to reduce course load on students in view of the COVID-19 pandemic has been welcomed by various school representatives, but a section of academicians alleged that the exercise appears to be "ideologically" driven.

The Central Board of Secondary Education (CBSE) in its syllabus rationalisation exercise has dropped chapters on democracy and diversity, demonetisation, nationalism, secularism, India's relations with its neighbours and growth of local governments in India, among others, as per the updated syllabus.

On Tuesday, the board had notified that it has rationalised by up to 30 per cent the syllabus for classes 9 to 12 for the academic year 2020-21 to reduce course load on students amid the COVID-19 crisis, after suggestions from various quarters, including parents.

The HRD Ministry maintained that the curriculum has been rationalised while retaining core elements.

However, school representatives raised concerns over the lack of clarity on whether reduction of syllabus will impact syllabus of entrance examinations like NEET and JEE.

The academicians also claimed that it appears more importance was given to "political considerations" than academics in reducing the syllabus.

"On the face of it, it appears that there is some ideological element in the choice of what is deleted. How do you optimise learning during this time? You are trying to reduce the investment in education, you are compromising on the learning of students," Professor at the Jawaharlal Nehru University's School of Social Sciences Surajit Majumdar told PTI.

This is not the way to approach the issue of how to respond to the pandemic, he said.

"Reduction does not have to be because of the pandemic but for optimisation of learning," Majumdar said.

"There are other ways to think of adjusting like making adjustments to the academic calendar. What will you do for primary students? This is a very casual approach. It reflects that there is no interest in having an educated society," he said.

Rajesh Jha, a political science professor at the Delhi University (DU), said when the choice based credit system was introduced in varsity, the paper on nationalism and colonialism, which was earlier compulsory was made optional in 2017.

"Now, it has also happened to school syllabus. Unfortunately, political considerations have taken over academics. This will only affect academic rigour and quality. The concepts of liberty, equality, social justice, secularism are linked. How can one be taught without other?" he said.

Another DU political science professor, who did not wish to be named, said," Chapters like democracy and diversity have been dropped. Crucial chapters from history have been dropped too about social reform movements."

"It is understandable to reduce course load of students in such times but some of these chapters are also included in undergraduate studies so students are expected to know some basics," the professor said.

The views of the academicians were echoed by Rajya Sabha member Priyanka Chaturvedi and West Bengal Chief Minister Mamata Banerjee.

"Shocked to know that the Central Govt has dropped topics like Citizenship, Federalism, Secularism & Partition in the name of reducing CBSE course during #COVIDCrisis. We strongly object to this & appeal @HRDMinistry, GoI to ensure these vital lessons aren't curtailed at any cost," Banerjee tweeted.

Cutting syllabus workload is good but it shouldn't become an excuse to curtail different streams of thoughts, she tweeted.

Universities and schools across the country are closed since March 16 when the Centre announced a classroom shutdown as a measure to contain the COVID-19 outbreak.

A nationwide lockdown came into effect on March 25. While the government has eased several restrictions, schools and colleges remain closed.

The HRD Ministry had announced in May that the syllabus will be reduced for the next academic session to reduce burden on students due to learning disruption caused by closure of schools because of COVID-19.

Several concerns over course load were raised by parents, who put out online petitions on the issue.

"As great a tool as online education is, it comes with certain limitations, and I believe that the reduction of syllabus is a fair move as many students who live in rural, underprivileged areas, were deprived of education because they did not have access to gadgets, power supply, and sufficient bandwidth  which are the prerequisites of online education," said Alka Kapoor, Principal, Modern Public School, Shalimar Bagh.

Reduction of syllabus makes sense in that regard, she said.

A representative of DAV Public School, Gurgaon, said,"Rationalisation of syllabus is a welcome move".

"The board has not barred us from teaching the dropped chapters it is just that students won't be evaluated for those chapters. Classroom teaching cannot completely be taken over by alternative methods, reduction in syllabus was very much needed," the representative said.

It can't be expected from students to bear the same course load as they were supposed to do during regular classroom so reduction in syllabus for this year is a wise move, she said.

The government must also clarify whether syllabus for entrance exams will be reduced too or will continue to be the same, Jha said.