India   All India  08 Mar 2018  2 BJP ministers resign from Andhra cabinet after TDP walks out of Centre
India, All India 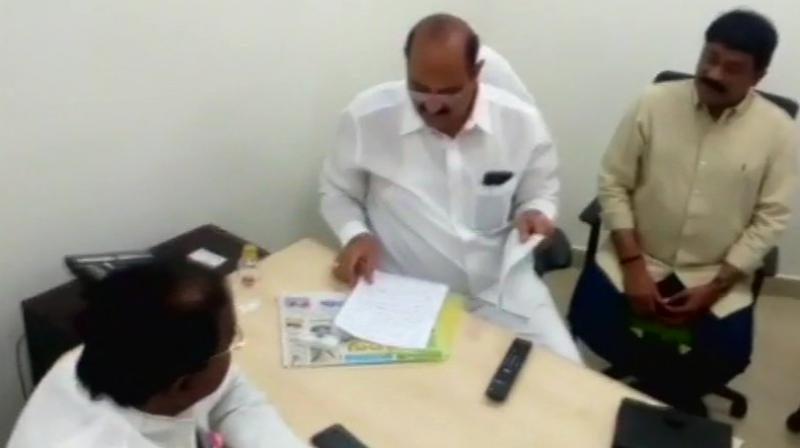 Amaravati: In a reciprocal move, two BJP ministers in Andhra Pradesh government submitted their resignations on Thursday in the Chief Minister's Office at Amaravati after the late evening announcement of Chandrababu Naidu that two of TDP lawmakers will pull out from the Centre over the government's refusal to give the state central funding under a "special status".

The two BJP ministers who resigned from the Andhra Pradesh cabinet are Dr Kamineni Srinivas and Pydikondala Manikyala Rao. Srinivas was the minister for health and Rao was the endowments minister.

According to news agency ANI, BJP state legislator PVN Madhav said, “Decided that our ministers will resign from TDP Cabinet. We will be going to the people and telling them all the things Centre has done for the state. Since independence till date, no state has received as many favours as that were given to Andhra Pradesh."

Hours after Union Finance Minister Arun Jaitley, at a press conference, said the Centre was committed to offer the monetary equivalent of special status to the state, which will be presented as a 'special package', Chandrababu Naidu announced the decision that two of his ministers will pull out from the government.

Arun Jaitley said the special package that has been announced by the Centre is better than special status and there is no difference between the two. He said funds will be allotted according to the Finance Commission’s recommendations but not on the basis of regional sentiments.

Also read: No special status but will give equivalent monetary benefit to Andhra: Jaitley

Chandrababu Naidu took the decision after holding a meeting with party MLAs.

Naidu said, "It was with a specific purpose that we joined the government.... When that purpose is not being fulfilled, there is no use continuing in the cabinet."

TDP leaders have been protesting in the Parliament after the Union Budget 2018 was presented in the House in February which disappointed them as Jaitley’s speech neglected Andhra Pradesh.

The party faces extreme pressure in Andhra Pradesh ahead of Assembly elections and the general election in 2019, with opposition parties accusing Chandrababu Naidu of failing Andhra Pradesh by not ensuring special status for it as a partner at the Centre.

Addressing the Andhra Pradesh Assembly on Wednesday, Chandrababu Naidu made an emotional appeal. "Why won't you give us special status, it is our right, respect people's feeling," said the chief minister, adding that the "onus is on the Centre to clarify its position. We are not angry, we are asking for our rights." Naidu said he had visited Delhi 29 times over the demand.

According to reports, Chandrababu Naidu spoke to TDP ministers via teleconference and lashed out at the Centre saying it was "insulting the sentiments" of the people of the state by not honouring the promises made in the AP Reorganisation Act, 2014, and also in Parliament when the state was bifurcated to carve out a separate Telangana state. He said there would be "no compromise in protecting the state's interests. Let us bear whatever difficulty, but we will take a right decision at the right time."