Let Rahul give accounts of 4 generation of dynasty: Amit Shah 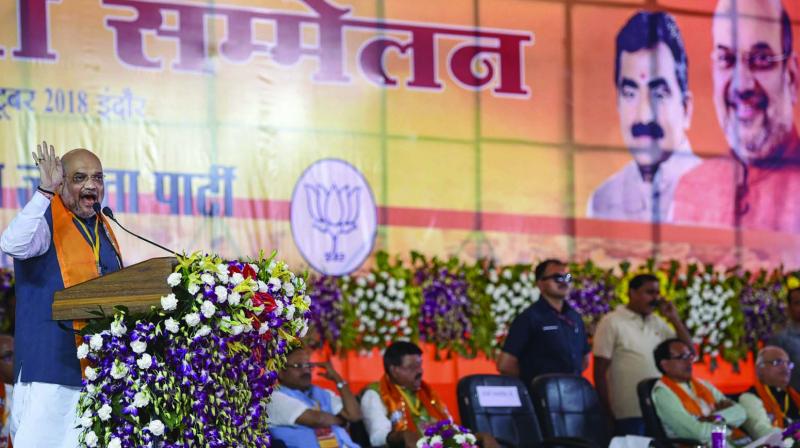 Bhopal: BJP president Amit Shah on Saturday called upon his Congress counterpart Rahul Gandhi to give accounts of performances of the four generations of his dynasty before seeking achievements of four-year-old Narendra Modi government at the Centre.

Addressing the party workers in Indore in MP, Mr Shah said what has been achieved in last four years under the NDA government could not be done in past 70 years. He cited the path breaking measures such as “One Rank One Pension” policy and steps to increase farmers’ income by one and half times by 2020 introduced by the Narendra Modi government, to drive his point home.

Besides, 15 crore jobs have been created for youths in the last four years, he added. “Congress only pursued vote bank politics to remain in power. Mr Gandhi cannot understand the sacrifices of our soldiers who laid down their lives while protecting borders of the country”, he said.

Heaping praises on chief minister Shivraj Singh Chouhan for transforming Madhya Pradesh from a “Bimaru” or sick state to a developing one in the last 15 years of BJP rule in the state, he dared MP Congress head Kamal Nath to join a debate on development. “Mr Chouhan has spread road network and did lot of works for development of agriculture and farmers in MP. He is seen as poor men’s leader”, Mr Shah said.

Earlier Mr Shah offered puja at Maha Laxmi temple in Indore and walked half a km from there to reach a “paan shop” in Rajwada from where he launched campaign for the party.

He was offered a “paan” by the shop owner.