Prime Minister Narendra Modi visited Meghalaya in December 2017 and addressed a public rally in Shillong to kick-start the poll campaign. 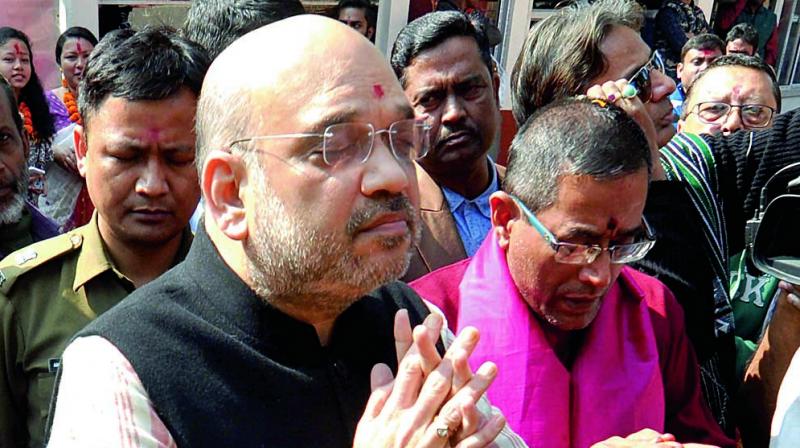 BJP president Amit Shah offers prayers at Kamakhya temple before commencing his tour in the Northeast from Garo Hills in Guwahati. (Photo: PTI )

Guwahati: Bharatiya Janata Party (BJP) president Amit Shah, who is on a three-days visit to the poll-bound northeastern states, on Saturday said that the Congress-led government in Meghalaya is set to lose the elections in the state.

Addressing a rally at Tikrikill in Garo Hills — stronghold of Meghalaya chief minister Mukul Sangma — Mr Shah accused the Congress leaders of indulging in rampant corruption. “The Congress leaders have built bungalows in Guwahati and Delhi by indulging in rampant corruption in the aid sent by the Narendra Modi government. Once the BJP government comes to power then there will be a change and people of the state will be able to build their own houses not the leaders,” said Mr Shah.

“The BJP government in Meghalaya means all round development of the state. The corrupt regime of the Congress is all set to go,” he said.

He said that Central government was pumping in huge fund for the development of the state but majority of it is siphoned off.

“I am confident that people of Meghalaya is prepared to uproot the corrupt government of the Congress party in 2018,” Mr Shah said.

Mr Shah will spend the night in Shillong and leave for Tripura on Sunday morning. His visit assumes significance considering the fact that three northeastern states — Meghalaya, Tripura and Nagaland — are going to polls this year.

Prime Minister Narendra Modi visited Meghalaya in December 2017 and addressed a public rally in Shillong to kick-start the poll campaign.