Nonetheless, online activism has been effective in calling out sexism and misogyny. 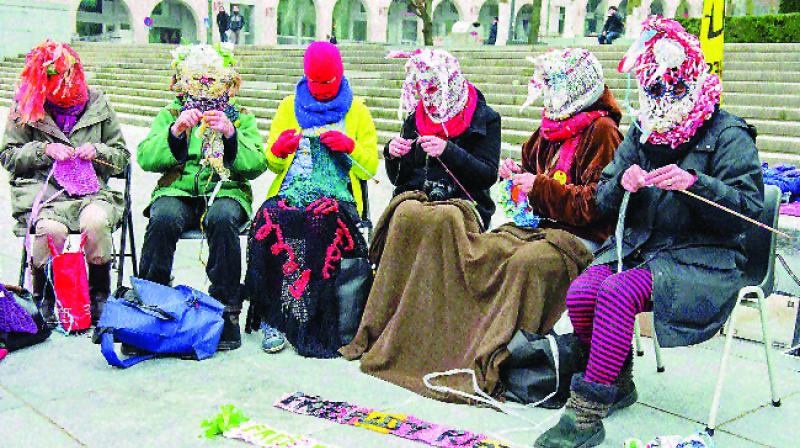 Barely two weeks before the 106th year of International Women’s Day, two seemingly unrelated events gave a fillip to the already variegated garden of online feminism in India: one, the release of Urvashi, Urvashi, a feminist remix of A.R. Rahman’s song and the other, a simple Facebook post by a 20-year-old college student Gurmehar Kaur that dominated a fractious debate over nationalism and patriotism.

The contrast between the two couldn’t be more apparent. The feminist remix is a fun, cheeky and in-your-face take on the ‘bullshit’ that permeates all the instructions, prohibitions and restrictions that women in India face. The Facebook post was grim and its message, unequivocal: that students would not be intimidated by the violence of the Akhil Bharatiya Vidyarthi Parishad (ABVP).

But the similarity between the two was also immediately clear. Both were trolled, the student much more so. Her call for peace (she was the daughter of an officer who lost his life in the Kargil conflict) was drowned by the attacks on her. She was hounded, threatened with rape and even the Union minister of State for Home Kiren Rijuju asked who was polluting her mind!

While it is clearly difficult to accept that women can be independent, thinking voices for peace over conflict or for progressive ideas that seek to break restrictive boundaries, the violent backlash of every expression of their agency is also amplified in an increasingly digital arena of debate. Nonetheless, online activism has been effective in calling out sexism and misogyny.

In 2009, the ‘Pink Chaddi’ campaign, launched as a protest against the Sri Ram Sene’s attack on a pub in Mangaluru, brought home the power of social media as a campaigning tool. Started by a group that called itself the ‘Consortium of Pub-going, Loose and Forward Women’, the campaign resulted in the dispatch of around 3,000 pink panties to the office of the Sri Ram Sene. The campaign generated the inevitable debate over whether this was legitimate form of protest but the sheer effrontery of this protest won out. Pramod Mutalik, the leader of the right-wing organisation, who even called the campaigners perverted, was embroiled in a number of court cases over his organisation’s vigilante methods.

Other instances of online activism have focused on issues such as street harassment. In 2003, the Blank Noise project asked women to collect the clothes they were wearing when they were harassed. In 2011, ‘Slutwalks’ were organised across cities to express the right of women to dress provocatively in public and not get harassed.

Then, in 2015, ‘Happy to bleed’ was started by Nikita Azad, a Patiala-based woman, who protested the comment by Sabarimala temple head Prayar Gopalakrishnan that the temple would continue to ban menstruating women. The campaign exhorted women to hold up sanitary napkins and placards against patriarchal notions that women were considered “impure” during menstruation.

While online feminist activism has raised powerful questions on social taboos, it may have obfuscated crucial issues in the real world. It also excludes the vast majority of women who have little or no access to digital media and its predominant use of English in campaign messages immediately restricts impact.

In her research paper From the streets to the web, Looking at feminist activism on social media (Economic and Political Weekly, April 2015), Sujata Subramanian points out that “online spaces have given rise to multiple counterpublics” which have helped create spaces for women to share personal narratives and form solidarity networks. But it is also a space circumscribed by unequal access and gendered violence, restricting the expression of marginalised groups.

Besides, only a few campaigns really work. Her research, consisting of interviews with women activists also brings up an uncomfortable truth — that despite varied voices of women on social media, certain kinds of issues are ‘cooler’ than others. Disability rights issues for instance, don’t get the kind of response they should.

Given the relative independence and accessibility of online media, a number of campaigns have gained immense traction in online spaces. And apart from organised campaigns, feminists have begun using networks online to build solidarities.
Two such campaigns are illustrative — Pinjra Tod by university students in Delhi and Chalo Nagpur, by autonomous women’s organisations across India.

Campaigns such as Pinjra Tod started out as a collective effort to ensure affordable and not gender-discriminatory accommodation for women students across Delhi. Today, it has grown to challenge casteist and patriarchal edifices in higher education and its programme for March 8 brings together not just the implementation of UGC guidelines on sexual harassment on campuses but the more grim reality of the deaths of students murdered for speaking out on sex assaults and casteist practices.

Chalo Nagpur is a call given by multiple women’s organisations  who are gathering on March 10 in Nagpur to observe the 120th death anniversary of Savitribai Phule. The campaign has launched a Facebook page and a Twitter account against “communal, brahmanical, feudal, capitalist and casteist patriarchy”. Condemning the sexual crimes by dominant castes and the state upon Dalit girls and women, the call is a demand for accountability and justice for all victims and an end to the impunity offered to perpetrators by the state.

But clearly, there is still much to be done. Feminists who use online spaces will need to engage much more over issues of internet freedom, and policy. Last November, a two-day discussion on ‘Imagining a Feminist Internet’ — organised by the Centre for Internet and Democracy — discussed a host of issues including the implications of gendered surveillance and sexual rights and digital porn. This writer spoke at a session on the need for an active exploration of a feminist Internet of Things that would be egalitarian and non-hierarchical. It also needs to be much more inclusive. But for now, as political imperatives become sharper, the convergence of online and offline feminist activism will provide the crucial edge.

The writer is an independent journalist based in Mumbai