The names of Pathak and Tulli were added to the FIR, which was lodged on December 29 against the owners of '1 Above'. 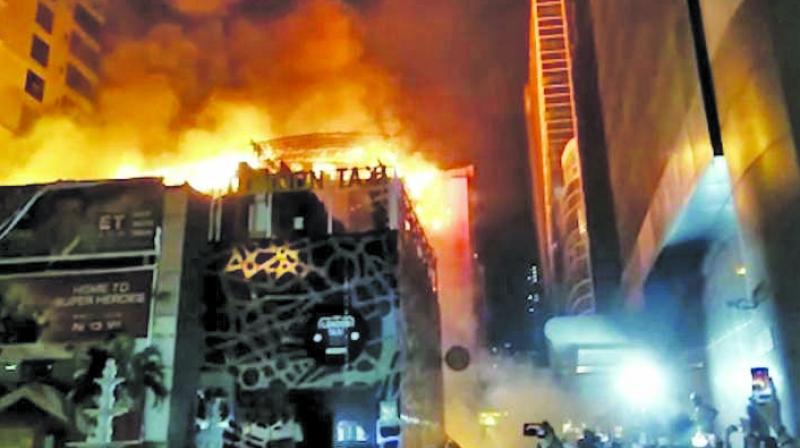 14 people were killed in a blaze at Kamala Mills compound in Lower Parel on December 29, 2017. (Photo: PTI)

Mumbai: The police on Saturday arrested Yug Pathak, the son of a retired IPS officer and one of the owners of the Mojo's Bistro pub, in connection with the deadly fire at the Kamala Mills compound here on December 29, which had claimed 14 lives.

On Friday, the Mumbai Fire Brigade, in its preliminary probe report on the fire, which had engulfed Mojo's Bistro and the adjacent "1 Above" pub at the Kamala Mills compound in Lower Parel on December 29, had said the fire possibly started at Mojo's Bistro due to the flying embers from a hookah.

The police on Saturday booked Pathak and his partner, Nagpur-based businessman Yug Tulli, under IPC sections 304 (culpable homicide not amounting to murder), 338 (causing grievous hurt by act endangering life and personal safety of others) and other relevant provisions.

The police had recorded Pathak's statement in the case earlier.

The names of Pathak and Tulli were added to the FIR, which was lodged on December 29 against the owners of "1 Above" --- Kripesh Sanghavi, Jigar Sanghavi and Abhijeet Mankar --- said a police official.

"As of now, we have arrested Pathak, while his partner Tulli has been summoned as he is also wanted in the case," senior police inspector, attached to the N M Joshi Marg police station, Ahmed Pathan said.

"We will produce Pathak before a court soon," he added.

Earlier, the police had arrested two managers of "1 Above" in connection with the fire.

The police have also announced a reward of Rs one lakh for any information about the three pub owners, who are on the run.