India   All India  05 Nov 2017  Cong has run away, not enjoying one-sided battle: Modi on Himachal polls
India, All India

Cong has run away, not enjoying one-sided battle: Modi on Himachal polls

The people of the state, the Prime Minister says, had decided to teach a lesson to Congress's 'Sultanate'. 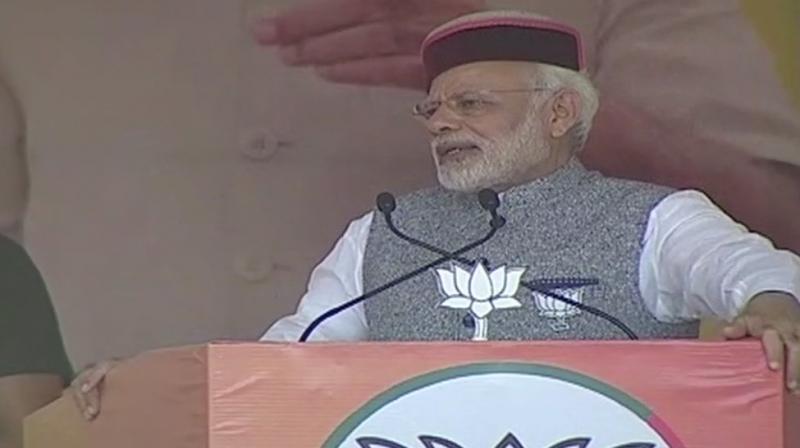 Una: Prime Minister Narendra Modi on Sunday hit out at the Congress, saying it had "run away" from the Himachal Pradesh electoral battle, which he described as a contest being fought by the people of the state.

Campaigning for the third day in a row in the state that goes to the polls on November 9, he said the election was not being fought by his party, the BJP, but the people of the state who were out to "teach" a lesson to the Congress for corruption and poor law and order.

"I am sad as I am not enjoying the election this time, as the Congress party has left the ground and run away. These elections have become one-sided," he said at a rally in Una.

Attacking the Congress on the issue of corruption, Modi accused the previous Congress-led government at the Centre of abusing subsidies worth Rs 57,000 crore. He claimed he had stopped this misuse, and the money was now being used for the welfare of the poor.

"Never has there been a one-sided election as seen in this election. The reason for this is that the country knows what the Congress government is like and what its intentions are," he said.

In the last 20 years, Modi said, he had not seen an election like this.

"After being in politics for so long, I can sense which way the wind is blowing. But this time one can see a storm in Himachal. The anger of the public is coming out against corruption, bad law and order, for protection of women and daughters," Modi added.

The people of the state, he said, had decided to teach a lesson to Congress's "Sultanate".

"This time we have to admit that it's not the BJP, or its workers or leaders, fighting (the poll). Himachal's election is being fought by the people of the state who have decided to teach a lesson to Congress's 'Sultanate'," he said.

The Congress's top leaders, holding rallies in Himachal, had "dared to face the public" and attack him and state leaders such as Prem Kumar Dhumal. But they had nothing to say, Modi stressed.

He said middlemen had looted the treasury in the name of subsidies in the past.

"Over Rs 57,000 crore in subsidies were looted by middlemen. Modi has stopped all this and this money is now being spent for the welfare of the poor," he said, holding that this was the reason for the Congress's attack on him.

He also took a dig at former Prime Minister Rajiv Gandhi for his statement that out of one rupee spent from Delhi, only 15 paisa reached the villages, saying that Gandhi was merely painting a picture of what the Congress did when it ran the country.

Gandhi, he added, was a doctor who diagnosed the problem of corruption but did noting about it.

Modi wondered where the 85 paise went.

"Who was that magician? Or which 'panja' (palm) was used to steal that money," he asked, in an apparent reference to the Congress's electoral symbol, the palm.

On GST, Modi said no businessman or business body had opposed the new tax regime, and the government was doing everything to resolve the problems of traders and shopkeepers after taking all states on board.

"If there is a problem in any corner of the country, we discuss and seriously think about it and try to resolve it.

The GST Council last month resolved all the problems of businessmen arising out of the one tax law," he said.