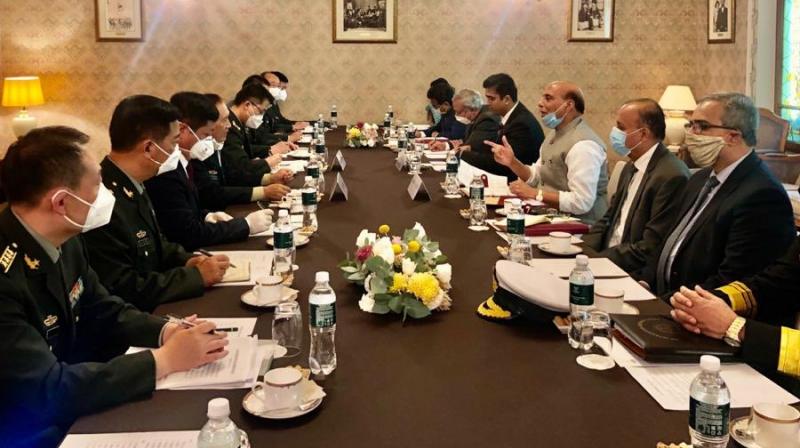 New Delhi: Defence minister Rajnath Singh on Friday met with Chinese defence minister General Wei Fenghe in Moscow in a first high level political contact between the two countries who are involved in a four month tense military stand-off in the Ladakh sector.

The two sides discussed the current military stand-off in Ladakh and ways to bring down tensions between the two nuclear armed countries.

It was the Chinese side which requested for a meeting with defence minister Singh who is in Moscow to attend the joint meeting of the heads of defence ministers of Shanghai Cooperation Organisation (SCO).

The meeting started at 9:30 pm Indian Standard Time at Hotel Metropol in Moscow. Defence Secretary Ajay Kumar and Indian Ambassador to Russia D B Venkatesh Varma were part of the Indian delegation.

It is the first highest level face-to-face meeting between the two sides after the border row escalated in eastern Ladakh in early May. External Affairs Minister S Jaishankar has previously held telephonic talks with his Chinese counterpart Wang Yi on the border standoff.

Hours before the talks, Singh, in his address at the SCO ministerial meet, said peace and security in the region demands a climate of trust, non-aggression, peaceful resolution of differences and respect for international rules.

Singh's comments in the presence of the Chinese defence minister was seen as a veiled message to China over the border row in eastern Ladakh.

In his address, Singh referred to the Second World War and said its memories teach the globe the "folies of aggression" of one state upon another that brings "destruction" to all.

"Peaceful stable and secure region of SCO member states, which is home to over 40 per cent of the global population, demands a climate of trust and cooperation, non-aggression, respect for international rules and norms, sensitivity to each other's interest and peaceful resolution of differences," Singh said.

Mr Jaishankar, who would also be travelling to Moscow for a foreign ministers’ meeting of the SCO member countries on September 10 could also meet his Chinese counterpart Wang Yi.

Earlier, Chinese state owned Global Times said that the meeting would help the two countries enhance communication in defence, control the situation and avoid the recent stand-off at the South Pangong Tso escalating into a wider clash.

The meeting comes in backdrop of tension between the two countries flaring up after India in a preemptive move occupied around two dozen peaks in Southern banks of Pangong Tso and Spanggur gap. There is a high tension in Chushul sector as China is angry with India’s preemptive move with both armies near to each other in the sector.