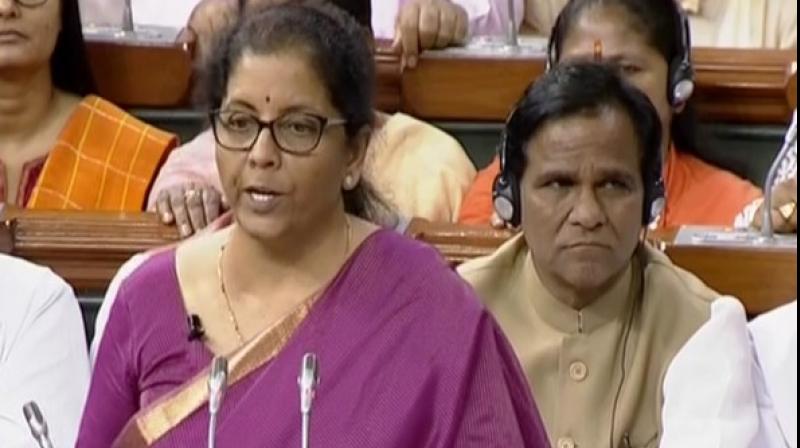 ‘Ensuring India's water security and providing access to safe drinking water to all Indians is a priority. A major step in this direction has been the constitution of Jal Shakti Ministry,’ Sitharaman stated. (Photo: ANI)

New Delhi: Union Finance Minister Nirmala Sitharaman on Friday said the Jal Shakti Ministry will work with all states to provide water to all rural households by 2024 under the 'Jal Jeevan Mission'.

"Ensuring India's water security and providing access to safe drinking water to all Indians is a priority. A major step in this direction has been the constitution of Jal Shakti Ministry," Sitharaman stated in the Parliament while presenting the Union Budget 2019-20.

"This new Ministry will look at the management of our water resources and water supply in an integrated and holistic manner and will work with states to ensure 'Har Ghar Jal', to all rural households by 2024 under 'Jal Jeevan Mission'," she added.

Union Minister for Jal Shakti Gajendra Singh Shekhawat had on July 1 launched the 'Jal Shakti Abhiyan' and said that government's aim is to make water conservation a people's movement.

Speaking at a press briefing, Shekhawat had said, "Water crisis is a major issue. We want to make Jal Shakti Abhiyan a people's movement. The United Nations has listed the issue of clean drinking water on number six on its sustainable development goals list. The UN expects all countries to provide clean drinking water to every household by 2030."

Shekhawat said, "In India per capita, water availability is decreasing. There are dangers of climate change as well so the country is becoming vulnerable. The rainwater harvesting capacity is only 8 per cent. So it is required to make water conservation a people's movement."

He went on to add, "Our target is achieving sustainable development by 2030. However, 'Har Ghar Nal Se Jal' (Water to ever household) is mentioned in BJP's manifesto. We will work to achieve the target of providing clean drinking water to every household by 2024 as mentioned in the party's manifesto. Jal Shakti Abhiyan is to create sensitivity on this subject and get a focused approach on this issue."

The Jal Shakti Ministry was constituted this year by the government.