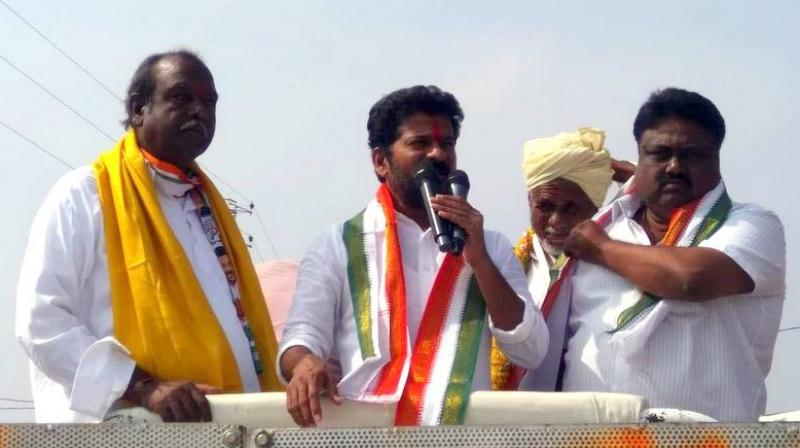 Kodangal (Telangana): Amid a high-octane campaign in Telangana for December 7 polls, Congress candidate from Kodangal and party’s working president from Telangana, Revanth Reddy, was detained and taken into preventive custody earlier on Tuesday.

Reddy was picked up by the Telangana police in the early hours of Tuesday, hours before scheduled meeting of caretaker chief minister and Telangana Rashtra Samiti (TRS) supremo K Chandrasekhar Rao in Kodangal.

Reddy had threatened to stop the public meeting of KCR.

A large team of police personnel arrived at Reddy’s house and broke open the door before taking him into custody.

The MLAs argued with cops, demanding that they be shown ID cards of the authorities and also copy of the arrest warrant.

The state election body, in a notice to the Congress party, said that Reddy had given a “protest call” to stop KCR’s campaign rally in Kodangal on December 2.

The election body hinted towards a probable law and order situation if Reddy's supporters try to stop the rally, where KCR's party men would also be present.

Reddy had appealed to people in his constituency to boycott the meeting of Chandrasekhar Rao and hold protest in the area.

Reddy’s arrest has sparked tension in the area as he enjoys massive support.

Meanwhile, security has been tightened in the area to avoid any untoward incident.

Talking to the media, Reddy’s wife, Geetha said, ”This is an attack on the people of Kodangal. Around 3 am, the police broke into our room and within a matter of five minutes, nearly 40 people forcefully took him (Reddy) away, the way they would take away a terrorist.”

Geetha also said that the police personnel didn't even show them their ID cards. “We don't know if they are Task Force, Intelligence or state police. One of them said they have orders from higher officials,” she added.

This is the second time during the state assembly polls this year that Reddy has faced the ire of the Election Commission.

Reddy was among the five politicians, who were served notices after the poll body received various complaints against them for allegedly violating the Model Code of Conduct.