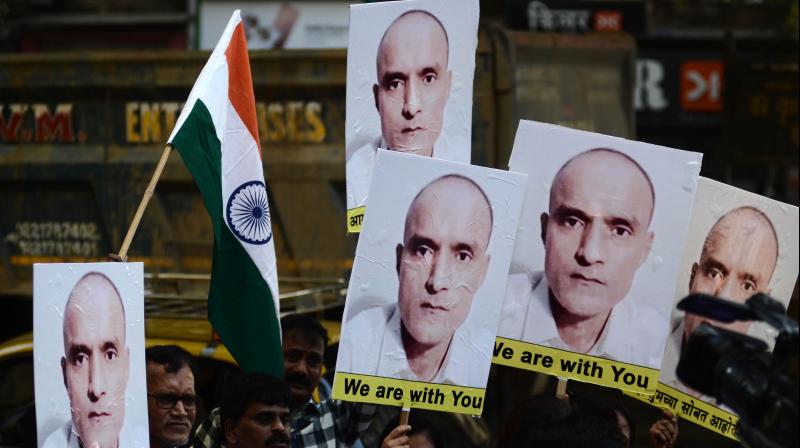 Pakistan directed the federal government to give India 'another opportunity' to appoint a lawyer to represent death-row prisoner Kulbhushan Jadhav. (PTI Photo)

Islamabad: A high court in Pakistan on Thursday directed the federal government to give India another opportunity to appoint a lawyer to represent death-row prisoner Kulbhushan Jadhav as it adjourned hearing for a month.

The Islamabad High Court (IHC) took up the case of appointment of lawyer for Jadhav to hear the review of the death sentence given to him by a Pakistani military court.

Jadhav, the 50-year-old retired Indian Navy officer, was sentenced to death by a Pakistani military court on charges of "espionage and terrorism" in April 2017.

Attorney General Khalid Javed Khan told the court that to comply with the orders of the International Court of Justice (ICJ), Pakistan granted consular access to India, however, it has not replied to Pakistan's offer to appoint a lawyer for him.

According to the short order issued after the hearing, Khan told the court that Jadhav was informed about the judgment of the ICJ and his rights under Article 36 of the Vienna Convention on Consular Relations as well as IHC orders on the appointment of his defence counsel.

The Attorney General told the court that he was informed by the officials of the Government of Pakistan that Jadhav has reiterated his earlier stance and has preferred to pursue the remedy of clemency instead of invoking his right under the Ordinance of 2020.

Khan told the court that India was duly informed of the proceedings of the court held on August 3, but its response is awaited, according to the order.

The court raised questions about the efficacy of the case and judgment if India or Jadhav were not ready to avail the opportunity of review.

The court observed that in order to remove any further doubt, India should be given another opportunity to appoint a lawyer.

In order to remove any doubt, and to fulfill the requirements of a fair trial, we feel that another opportunity ought to be extended to the Government of India to consider taking appropriate measures so as to ensure effective compliance with the judgment of the International Court... We, therefore, yet again restrain ourselves from proceeding in the matter in hand, according to the order.

The court also ordered that to ensure an effective review and reconsideration so as to give effect to the judgment of the ICJ, the Attorney General shall ensure that a copy of this order is provided to Jadhav.

The Government of Pakistan shall once again convey the orders passed in this petition to the Government of India to enable the latter to consider taking appropriate measures in order to ensure compliance with the judgment of the International Court, it said.

The court adjourned hearing and directed the Registrar to fix the proceedings at 02:00 PM on October 6.

Reacting to the court's order, Foreign Office spokesman Zahid Hafeez Chaudhri said at the weekly press conference that Pakistan remains fully committed to the implementation of the ICJ judgment.

India should still come forward and arrange a legal representative for Commander Jadhav for an effective review and reconsideration. The Islamabad High Court today again provided India another opportunity.

There are three ways to ensure implementation; first, Commander Kulbhushan Jadhav himself files a review and reconsideration petition; second, the Government of India does so on his behalf; and thirdly, that the Government of Pakistan arranges legal representation for Commander Jadhav, Chaudhri said.

On August 4, the IHC named three senior lawyers as amici curiae in the case of Jadhav as it had ordered the Pakistan government to give "another chance" to India to appoint a counsel for the death-row prisoner.

Amicus Curiae is a lawyer appointed by a court to assist in any matter or case.

On July 16, Pakistan provided consular access to Jadhav, but the Indian government said the access was "neither meaningful nor credible" and he appeared visibly under stress.

The Ministry of External Affairs said Pakistan is not only in violation of the judgment of ICJ, but also of its own ordinance.

Pakistan has introduced a special law to allow Jadhav to get his sentence reviewed as asked by the ICJ.

India approached the ICJ against Pakistan for denial of consular access to Jadhav and challenging the death sentence.

The Hague-based ICJ ruled in July last year that Pakistan must undertake an "effective review and reconsideration" of the conviction and sentence of Jadhav and also to grant consular access to India without further delay.

Pakistan claims that its security forces arrested Jadhav from the restive Balochistan province on March 3, 2016 after he reportedly entered from Iran. India maintains that Jadhav was kidnapped from Iran where he had business interests after retiring from the Navy.