Pehlu Khan (55) was lynched by suspected cow vigilantes in Alwar while he was transporting cattle on April 1, 2017. 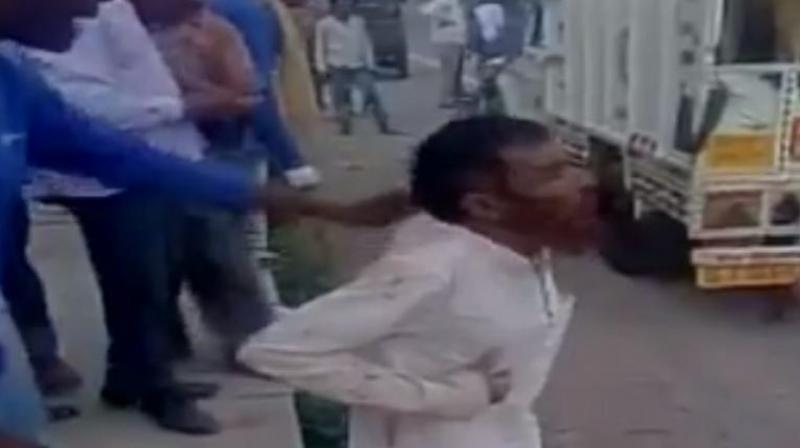 With the family-owned dairy farming business shutting down after Pehlu Khan’s death, his 28-year-old son now feeds his family of 11 by working as a labourer in his villag, Jaisinghpur in Haryana. (Photo: Screengrab)

New Delhi: A year since Pehlu Khan was killed allegedly by cow vigilantes in Rajasthan's Alwar district, his eldest son Irshad has been fighting a two-front war as the only breadwinner in the family and seeking justice for his father.

With the family-owned dairy farming business shutting down after the death of his father, 28-year-old Irshad now feeds his family of 11 by working as a labourer in his village, Jaisinghpur, in Nuh district of Haryana.

Pehlu Khan (55) was lynched by suspected cow vigilantes in Alwar while he was transporting cattle on April 1, 2017. He died while undergoing treatment at a hospital two days later.

"Our business of dairy farming ended with the killing of my father. Now, I do odd jobs as a daily wager, cutting crops and as a construction worker in the village. I earn around Rs 8,000 per month to feed my family, which includes my wife, four brothers, three sisters, mother, and grandmother," Irshad said at the sidelines of an event organised by the Bhumi Adhikar Andolan (BAA) on the first death anniversary of Pehlu Khan.

He alleged that not only justice was denied to his family, but there was also no financial help from any quarter.

"I am trying to get justice for my father. Some organisations have helped me but there is no compensation so far from the government," he added.

The Rajasthan government had still not made the case a priority and delivered justice to the victims or addressed the "increasing" number of cases of cow vigilantism, BAA said in a statement.

"Since Pehlu Khan's lynching, over 300 more cases have been reported. The victims were dairy farmers, Dalit and Muslim cattle traders and none of them got justice," CPI(M) leader Hannan Mollah said.

At a protest held at the Parliament Street in New Delhi, the Bhumi Adhikar Andolan called for a nationwide struggle against the increasing incidents of violence in the name of "cow protection", "vendetta" against all progressive movements and continued "attacks" on Dalits and minorities.