'He didn't care for his security': PM Modi thanks Trump for 'Howdy, Modi'

The 'Howdy Modi' event was organised by the Indian American community in the US. 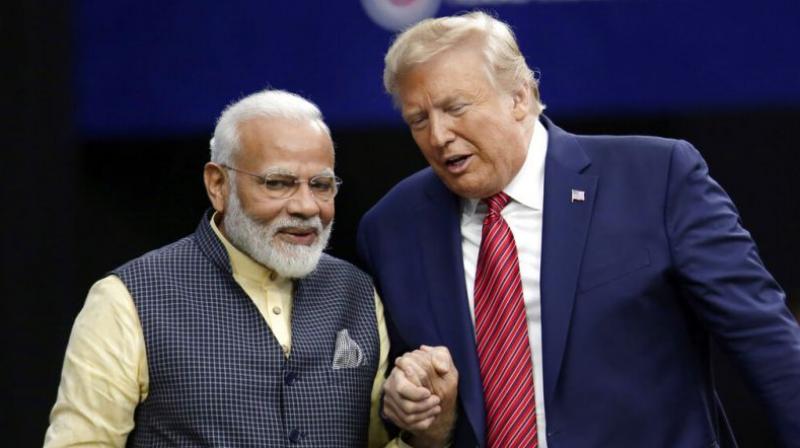 'I thank President Donald Trump for giving time, he didn't even care for his security and without hesitation walked hand-in-hand with me at the event to greet people,' PM Modi said. (Photo: File)

Ahmedabad: Prime Minister Narendra Modi on Wednesday thanked Houston Mayor Sylvester Turner for ensuring proper arrangements during the ''Howdy Modi'' event even though the city had witnessed a lot of rain before it.

Addressing a gathering at the airport in New Delhi on his arrival to attend events concerning 150th birth anniversary of Mahatma Gandhi, the prime minister said that the "Howdy Modi'' event was attended by the Republicans and Democrats, and the US President Donald Trump not only spent time but walked with him around the stadium.

"It was a commendable piece of work by the Houston Administration and I would like to thank the Houston Mayor for ensuring everything was right amid bad weather. There was a lot of rain before the event, but they pulled off a great job," PM Modi said.

The ''Howdy Modi'' event was organised by the Indian American community in the US.

The Prime Minister, who later had a series of bilateral meetings with foreign leaders and addressed the UN General Assembly, said every event started with the discussion on ''Howdy Modi'' and every world leader knew about it.

"Both Republicans and diplomats were present. President Trump who is the leader of such a big country, himself coming to the Indian event and staying for so long was a proud and happy moment for all of us. I thank President Donald Trump for giving time, he didn't even care for his security and without hesitation walked hand-in-hand with me at the event to greet people," PM Modi said.

"The might of India is increasing in the whole world, we must concentrate on it," he added.

"Singers from 150 countries have prepared the bhajan ''Vaishnav Jan'' and you would be surprised to know that they sang it very well and also knew its meaning. Gandhiji is relevant today, tomorrow and for the generations to come," said PM Modi.

He said Gandhiji's life provides solution for all problems including those related to environment and health.