India   All India  03 Oct 2018  BJP, Congress locked in a tug of war over Gandhi legacy
India, All India

BJP, Congress locked in a tug of war over Gandhi legacy 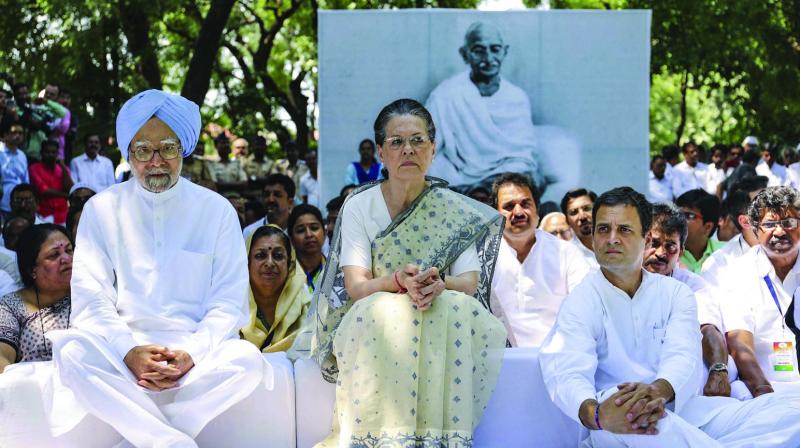 New Delhi: The tug of war to reclaim the legacy of Mahatma Gandhi intensified between archrivals Congress and BJP on his 149th birth anniversary Tuesday. While Prime Minister Narendra Modi paid tribute to the Mahatma, saying his principle of “ahimsa” has the power to unite humanity when terrorism, radicalisation, extremism and mindless hate are dividing nations, Congress president Rahul Gandhi targeted the PM, saying while “Gandhiji wanted to unite India, Modi wants to divide the nation”. The Congress also gave a clarion call to launch a “second freedom struggle” to “oust the Narendra Modi government and rid the country of divisive and autocratic forces”, and combat the ideology of “hate and violence”. Mr Gandhi was addressing party leaders at the Congress Working Committee meeting at Sevagram, near Wardha.

Paying tribute to the Father of the Nation, Mr Modi tweeted: “The noble thoughts of Mahatma Gandhi have given strength to millions across the world. He was a stalwart who lived for others and to make our world a better place.” Mr Modi also wrote: “In the 21st century, the thoughts of Gandhi remain as essential as they were in his time and offer solutions to several problems the world faces.” The PM attended several programmes on sanitation and renewable energy to mark the beginning of the year-long celebrations of Mahatama Gandhi’s 150th birth anniversary.

“Events related to sanitation and renewable energy shall be the focus of the Prime Minister’s engagements on Gandhi Jayanti,” said a statement from the PMO.

The Congress president and UPA chairperson Sonia Gandhi also visited Rajghat to pay tribute. Addressing a rally at Wardha after the CWC meeting, Mr Gandhi said while Mahatma Gandhi worked to unite the country, Mr Modi was working to divide it.

In a sharp attack on the BJP, a CWC resolution said the BJP was trying to “appropriate the Mahatma’s legacy for political expediency” It further added that “appropriating the Mahatma’s legacy may be politically expedient for some, but imbibing his principles and values in thought, word and deed is impossible for those who see in the Mahatma only electoral opportunities. One may borrow the Mahatma’s spectacles for publicity campaigns, but implementing his vision will remain unfulfilled unless his principles are followed”.

The CWC resolved to “expose the hollowness and doublespeak” of the ideologies and organisations who have never believed in, let alone followed, the Gandhian path of truth, tolerance, harmony and non-violence.

In a blog on the occasion of 149th birth anniversary of Mahatama Gandhi, Mr Modi wrote: “He remains a shining beacon of hope for millions of people across the world who seek a life of equality, dignity, inclusion and empowerment.”

He said people can follow Gandhi’s vision by doing simple things such as ensuring zero waste of food to imbibing values of non-violence and togetherness. “Let us think about how our actions can contribute to a cleaner and greener environment for future generations. Almost eight decades ago, when the threats of pollution were not as much, Gandhiji took to cycling,” Mr Modi recalled, in order to drive home his point.

Mr Modi also noted that over the past four years, 130 crore Indians have paid tribute to Mahatma Gandhi in the form of the Swachchh Bharat Abhiyan, which has emerged as a vibrant mass movement with commendable outcomes, and over 85 million households now have access to toilets for the first time.