Reports claim many properties belonging to TMC workers were being converted into BJP units after owners of these places switched sides. 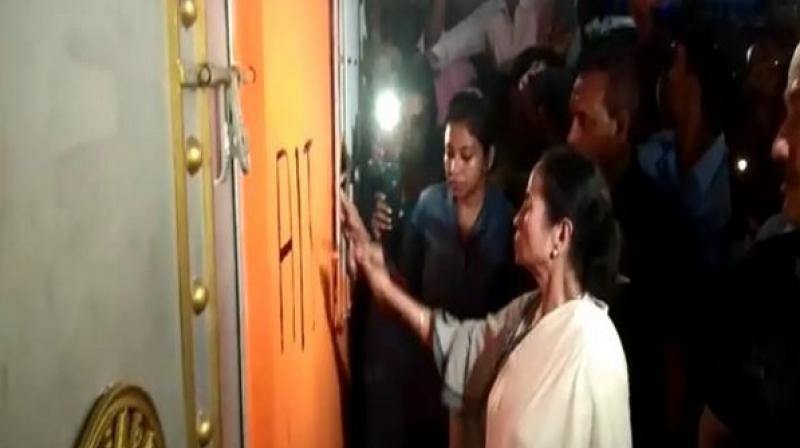 The building on which Mamata painted her party's symbol was allegedly captured by supporters of the newly elected BJP MP Arjun Singh who had won from Barrackpore after defeating Dinesh Trivedi. (Photo: ANI)

West Bengal: After the general elections, which was marked by violence in West Bengal, with the ruling TMC and BJP trading blame over the issue, both the parties are now allegedly "capturing" and "recapturing" each other's offices in various districts of the state.

On May 30, West Bengal Chief Minister Mamata Banerjee visited Naihati area of North 24 Parganas district and 'recaptured' an office, that had the BJP symbol and party name painted on it. The TMC supremo used a painter's brush to paint in black colour the All India Trinamool Congress (AITC) official party symbol (flowers and grass) over the saffron walls of the building.

The building on which Mamata painted her party's symbol was allegedly captured by supporters of the newly elected BJP MP Arjun Singh who had won from Barrackpore after defeating Dinesh Trivedi.

During the same visit, Mamata also reprimanded people chanting 'Jai Shri Ram' slogan near her convoy here and had said those who raised the slogans were "all outsiders and BJP people".

"They are criminals and were abusing me. They are not from Bengal," she had said. This prompted the BJP to announce that it will send 10 lakh postcards with "Jai Shri Ram" written on them to her.

Reportedly, many TMC offices at block and village level in the state were painted in BJP colour (saffron) after the party made inroads into West Bengal by winning 18 of the 42 seats in the state cutting the TMC down to size by limiting its win to only 22 seats against the 34 it had won in the 2014 Lok Sabha polls.

Reports also claim that many properties belonging to TMC workers were being converted into BJP units after the owners of these places switched sides to join the BJP.

Meanwhile, Mamata in a blog post on Sunday attacked the BJP stating that some of its workers and supporters were using a section of the media to spread the ideology of hate.