Yoga thus becomes the 13th intangible cultural heritage that has been listed from India so far with Unesco. 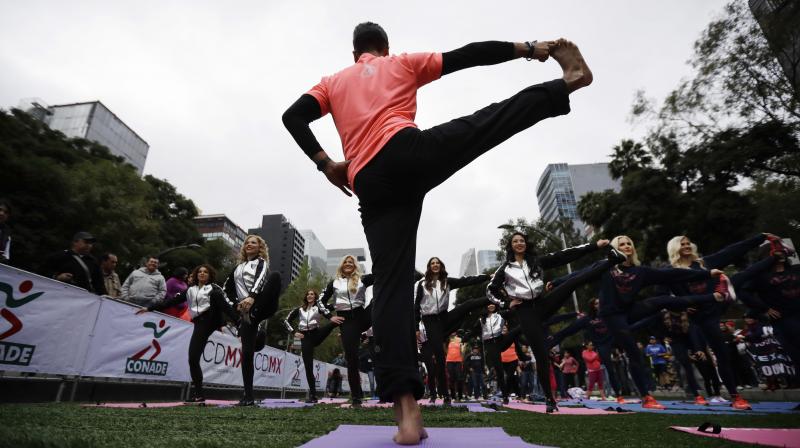 The MEA also said that the inscription and its classification as a “human treasure” brought immense recognition to yoga, clearing the rigourous criteria set by Unesco. (Photo: PTI)

New Delhi: In what India has termed a “diplomatic triumph” for it, yoga now joins Unesco’s list of Intangible Cultural Heritage of Humanity after an Indian proposal in this regard was unanimously supported by all the 24 members of the Intergovernmental Committee of the body at its session in Addis Ababa, Ethiopia. This comes after the United Nations declared June 21 as the International Yoga Day in 2014.

In a statement, the Ministry of External Affairs (MEA) said, “In a diplomatic triumph for India, the Intergovernmental Committee for the Safeguarding of the Intangible Cultural Heritage has inscribed yoga in Unesco’s Representative List as the Intangible Cultural Heritage of Humanity. This Declaration of Yoga as a “human treasure” enjoyed the unanimous support of the 24-member intergovernmental committee, which overturned the decision of an evaluation body of technical experts, seeking to defer the case to the next session of the committee in 2017.”

Yoga thus becomes the 13th intangible cultural heritage that has been listed from India so far with Unesco, according to a statement by the Ministry of Culture. India’s existing entries include the Chhau dance (inscribed in 2010), the Buddhist chanting of Ladakh (2012), Sankirtana — the ritual singing, drumming, and dancing of Manipur (2013) — the traditional brass and copper craft of utensil making among the Thatheras of Jandiala Guru, Punjab (2014) and Ramlila — the traditional performance of the Ramayana (2008).

“Prime Minister Narendra Modi has played a key role in having the United Nations declare June 21 as International Yoga Day in 2014. The government of India has been taking forward the momentum created by celebration of International Yoga Day in 2015 and 2016 with greater and more active participation of youth and other stakeholders of the community. The government has continuously been promoting yoga as a human treasure and a key to noble health,” the Ministry of Culture said.

The MEA also said that the inscription and its classification as a “human treasure” brought immense recognition to yoga, clearing the rigourous criteria set by Unesco. It therefore emphasises yoga’s role as a social practice, an oral tradition and a system of ancient and scientific knowledge facilitating an enhanced harmony and peace across caste, creed, gender, age and nationality.