The Mumbai Airport authorities closed the main runway after SpiceJet flight coming in from Jaipur overshot mark because of heavy rainfall. 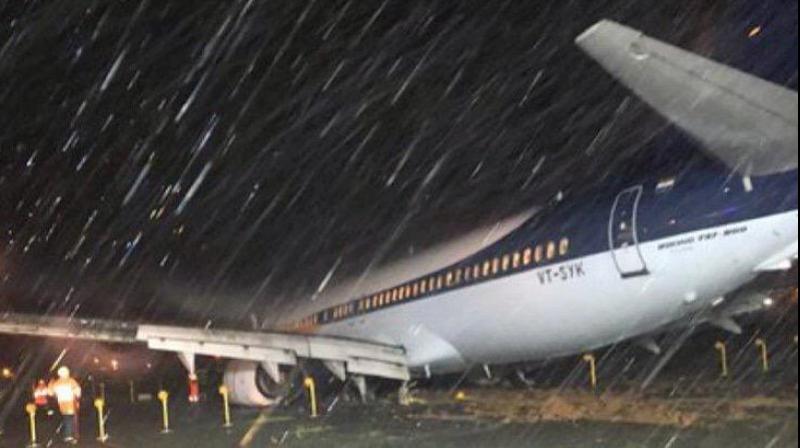 A second runway has been made operational for flights, as the plane continues to be stuck at the end of the runway. (Photo: ANI | Twitter)

New Delhi: Mumbai airport's main runway was closed on last Monday night after a SpiceJet flight, flying in from Jaipur, overshot its mark because of the heavy rainfall.

A second runway has been made operational for flights, as the plane continues to be stuck at the end of the runway.

This incident has led to the diversion of as many as 54 flights to nearby airports of Ahmedabadand Bengaluru.

In a statement, a spokesperson of the airline said, “Spicejet SG 6237 Jaipur-Mumbai flight overshoots runway while landing at Mumbai Airport. All passengers are safe, no injuries reported.”

INCIDENT: SpiceJet #SG6237 Jaipur to Mumbai (Boeing 737-800 VT-SYK) has skidded off the runway on landing during heavy rain at 2350IST (1820UTC) today. Many flights were forced to hold & have now diverted elsewhere. 3rd India runway excursion in 48 hours. https://t.co/fqEEegeuar pic.twitter.com/oWdH4nSujM

Air Vistara was among several other airlines, which posted notices of delay on social media.

While Vistara confirmed the cancellation of ten flights plying in and out of Mumbai, including going to Delhi, Kolkata, Hyderabad, Bengaluru and Chennai, Indigo warned its passengers that the bad weather could spell delays and cancellations.

Among the international flights that were diverted was a Korean Air flight from Seoul to Mumbai, a Lufthansa flight from Frankfurt and an Air India flight from Bangkok.