Nor do they have any cold store facility to hold back the harvested mangoes to sell them during off-season periods. 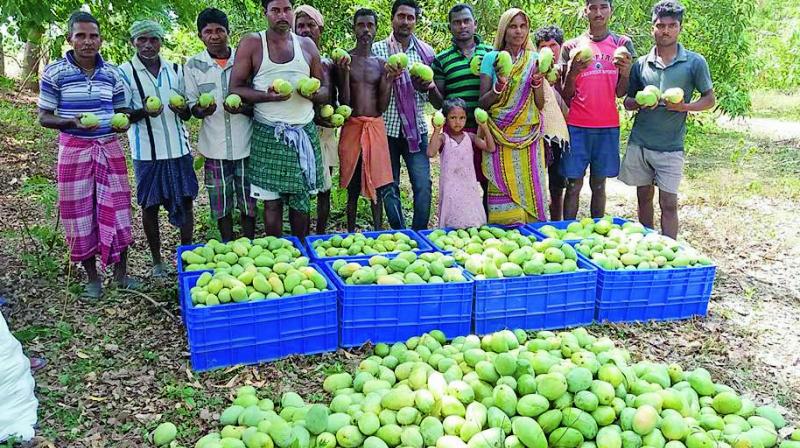 The mission of the Wadi project was to enable the tribals to get work at their doorsteps and not to migrate to other cities in search of work.

Malkangiri (Odisha): Over one thousand mango growers in Odisha’s Malkangiri district are in distress as they fail to sell their produce at actual market prices. While one kilogram of good variety of mango sells at Rs 50 in Bhubaneswar, these farmers are being forced to sell their produce between Rs 5 and Rs 10 per kg sans the availability of marketing opportunities in the district.

Nor do they have any cold store facility to hold back the harvested mangoes to sell them during off-season periods.

Having been inspired by the success of National Bank for Agriculture and Rural Development (NABARD)’s “Wadi” project in Gujarat, the Malkanagiri farmers, who mostly belong to various tribal communities, had in 2007 undertaken mango cultivation in a massive scale. The mission of the Wadi project was to enable the tribals to get work at their doorsteps and not to migrate to other cities in search of work. This year, the farmers have reaped a bumper harvest of the popular varieties of the luscious fruit such as Amrapali, Mallika, Dusseri and Baganpalle. “However, owing to the alleged apathy of the state government machinery, mango farmers of Korukonda and Malkangiri blocks are forced to sell their produce at as low as Rs 5-10 a kg to exploiting traders in the absence of infrastructural facilities like cold store and mandis for the perishable item which is selling at nothing less than Rs 40-50 per kg in the market,” Bhaskar Behera, secretary of Sahid Laxman Nayak Development Society (SLNDS), a development organisation that facilitated NABARD’s Wadi project in the area, said on Thursday. Bimal Mahato, a tribal has developed a mango orchard on an acre of land under NABARD’s Wadi project. Since 2014, he has been harvesting about 100 quintals of mango every year. But he is forced to distress sell his produce every year due to lack of proper marketing facilities and cold store to preserve the perishable fruit.

“We are unable to sell our mangoes at proper rates. Since there is no mandi, we are forced to sell our produce to traders at rates as low as Rs 5-10 a kg. Also, we don’t have facilities like cold storage,” said Bimal.

“The farmers were provided assistance for five years for saplings, fertilisers, pesticides, inter-crop, soil conservation, upkeep, and irrigation. Now they are reaping a bumper harvest. We are trying at our own level for some kind of marketing intervention so that the farmers are not forced to distress sell,” said SLNDS secretary Mr Behera.

Similar reports of distress sale of mango were also received from Kalahandi district.