Tharoor filed 3 different applications in the HC accusing Goswami and Republic TV of 'defaming and maligning' him. 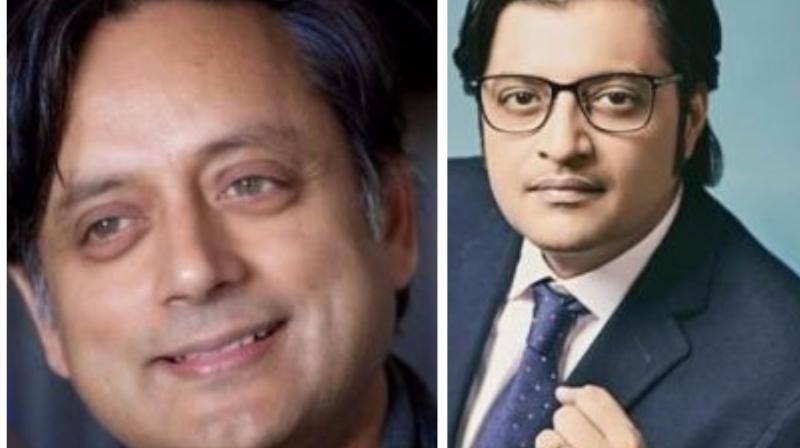 The court had earlier said the journalist could put out stories stating the facts related to the investigation of Pushkar's death but could not call Tharoor 'a criminal'. (Photo: Twitter)

New Delhi: The Delhi High Court on Friday refused to restrain journalist Arnab Goswami and his Republic TV from airing news or debate on Shashi Tharoor's wife Sunanda Pushkar's death case but asked them to respect the Congress MP's "right to silence".

Justice Manmohan said the right to air the story cannot be taken away but a balance has to be maintained.

The high court also asked Goswami and Republic TV to send an advance notice to Tharoor for his views before airing any news in connection with his wife's death case.

"Every individual has a right to silence. He cannot be forced or compelled to speak on the issue," the judge said.

The court's order came on three different applications filed by Tharoor in his Rs 2 crore defamation suit against Goswami and the channel for allegedly making defamatory remarks against him while airing news relating to the mysterious death of his wife.

Pushkar was found dead in a suite of a five-star hotel in south Delhi on the night of January 17, 2014 under mysterious circumstances.

Tharoor has alleged that they continued to engage in "defaming and maligning" him despite an assurance given by their counsel in the court on May 29.

The court had on May 29 said the journalist and his news channel could put out stories stating the facts related to the investigation of Pushkar's death but could not call the Lok Sabha MP from Thiruvananthapuram "a criminal".

The Congress leader has sought a direction to them that they should not mention the expression "murder of Sunanda Pushkar" anywhere, since it is yet to established by a competent court whether her death was a "murder".