India   All India  01 Mar 2018  To world Sridevi was Chandni; to me, my love, friend, writes Boney Kapoor
India, All India

To world Sridevi was Chandni; to me, my love, friend, writes Boney Kapoor

After Sridevi's funeral, Boney Kapoor posted an emotional note from her account, putting into words the void his wife's death has left. 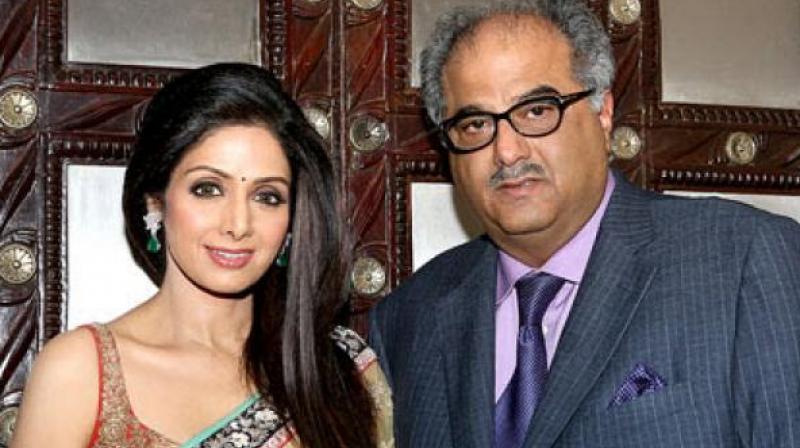 In the letter, Sridevi's husband Boney Kapoor asked that the family be allowed to grieve in private. (Photo: DC | File)

Mumbai: Hours after veteran actor Sridevi was cremated with state honours in Mumbai, a post was shared on her twitter account on Wednesday evening. Sridevi's husband Boney Kapoor posted an emotional note from her account, putting into words the void his wife's death has left and asking that the family be allowed to grieve in private.

"Losing a friend, wife and mother of two young daughters is a loss inexplicable in words. I would like to express my sincere gratitude to my family, friends, colleagues and well-wishers and all of you countless fans of my Sridevi who have stood by us like rocks. I am blessed to have the support and love of Arjun and Anshula, who have been such pillars of strength for myself, Khushi and Janhvi. Together, as a family we have tried to face this unbearable loss," read an excerpt from Boney Kapoor's letter.

For his beloved Sridevi, he wrote, "To the world she was their Chandni... the actor par excellence... their Sridevi... but to me she was my love, my friend, mother to our girls... my partner. To our daughters, she was their everything... their life. She was the axis around which our family ran."

Family of actor Sridevi also issued a statement, which was posted by her brother-in-law Anil Kapoor, nieces Sonam and Rhea.

Sridevi, who died in Dubai later on Saturday night, was cremated with state honours in Mumbai on Wednesday. She was just 54. A condolence meet was held in the afternoon at the Celebration Sports Club in Lokhandwala and later, she was taken to the Pawan Hans crematorium in Vile Parle.

Bollywood bigwigs Amitabh Bachchan, Shah Rukh Khan, Katrina Kaif and Vidya Balan congregated at the crematorium while others including Aishwarya Rai Bachchan, Jaya Bachchan, Deepika Padukone paid their last respects at the condolence meet. Thousands of fans had also queued up to bid adieu to Sridevi. Some had travelled from as far as Chennai and Karnataka.

Husband Boney Kapoor, brothers-in-law Anil and Sanjay Kapoor, stepson Arjun Kapoor and nephew Mohit Marwah accompanied Sridevi to her last rites. Her glass casket was draped with flowers and an enlarged picture of was also placed.

A post-mortem revealed that she had drowned in her hotel bathtub.

Sridevi married filmmaker Boney Kapoor in 1996. Janhvi and Khushi are their daughters. Arjun and Anshula are Boney Kapoor's children with his first wife Mona, who died in 2012.