All these girls have lives, professions, desires, but above and beyond all this substantive, meaningful stuff, they are pretty 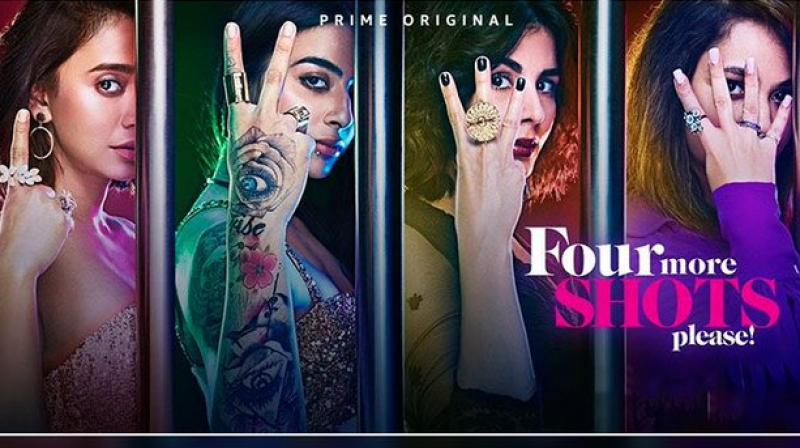 Season 2 of Four More Shots Please! doesn’t disappoint. Like Season 1, it’s pacy, fun, good-looking and fails the Bechdel test (whether two women talk to each other about stuff other than men) repeatedly and so robustly that it now has a special place reserved in the family tree of Sex And The City.

Four More Shots Please!, or 4MSP, is inspired not just by Sex And the City  the 1998 show in which four friends in New York regularly meet for lunch/dinner/drinks to discuss their love lives, work, bodies, desires, romance, men, babies and, well, sex  but also Lena Dunham’s Girls that was very funny and had, among other actors, Adam Driver and Riz Ahmed.

4MSP is about four girlfriends in Mumbai who mostly meet in a bar owned by Jeh Wadia (Prateik Babbar) where they have repeated shots of intoxicating beverages and then indulge in high jinks behaviour.

There is Damini Rizvi Roy (Sayani Gupta), an investigative journalist who quit her job last season and is now, to induce a bit of real politics into the show, writing a book about a judge who is killed just before he was to deliver an important judgment.

She also has a true love, Jeh, and a sexy stepney. Then there’s Umang Singh (Bani J), the trainer who has gone from being bisexual to gay. She's still in love with the star Samara (Lisa Ray) who now wants to play ghar-ghar.

There’s Anjana Menon (Kirti Kulhari), a lawyer and divorced mother, who is facing blatant sexism at work and quits her job to pursue both, professional and personal highs.

All these girls have lives, professions, desires, but above and beyond all this substantive, meaningful stuff, they are pretty and have chic, fashionable, expensive wardrobes.

"It's aspirational," says stylist Aastha Sharma who, along with her all-women team, has styled the show’s characters since it began. She says the brief for Season 2’s look was to push the style quotient higher.

From Aastha I learnt that the show has come under some criticism and online bitching for being all about fashion and sex, and is, thus, frivolous.
That hardly an original sin. 4MSP is simply following Sex And The City's template of style, story, plot while locating its characters in a different time, different place, with minor deviations and a little more melodrama.

Season 2’s director, Nupur Asthana, says this fashion-forward look was something she inherited (Season 1 was directed by Anu Menon), and that if she had to do it herself she would have done it differently.

Nupur, who directed Mahi Way  a 2010 Yashraj show about a big girl, her ambitions, desires, life doesn't see a problem or a contradiction with having a character like Sidhi, who is all about accepting her body, loving herself while calling out body-shamers and challenging the notion of what's sexy and beautiful, while the show constantly reinforces through all its other characters a certain idea of perfection, I.E. ramp-ready bodies, flawless skin, perfect hair and clothes that we see only in centre-spreads of glossies.

Nupur, who sounds like a candid, straight-shooter and uses both the F-words a lot, says that she was “careful not let the clothes distract from the emotional journey of the girls” and then talks with impatient irritation about the criticism the show has attracted.

It’s not all about glamour and sex, because there are only four minutes of making out in this season, she says and then brings up the long F-word, feminism.
“My show is 100 per cent feminist."

Okay. But I, for example, have no recollection of what happened in Season 1 except that the girls drank a lot, had fights with their boyfriends, amongst themselves, there was lots of making out, including with Dr Aamir Warsi (Milind Soman), and in a gym.

In this season too there's binge drinking, faltu talk, dirty talk, bitching about life partners, stumbling, getting up, and paid sex.

The show breaks some taboos, sure. But that's really not why it's the No. 1 show on Amazon Prime, as Nupur proudly announces, twice. It's doing well because its glamour quotient is very high, and because everyone always looks gorgeous, even while puking.

And of course there's a connect with the girls  they are nice, decent and have problems that many girls and women can relate to: Cheating, settling into a divorce, an extramarital affair with a man who says he has an open marriage, a relationship with a diva who can't see beyond herself, and, of course, the body accepting unsatisfying sex while emotions stand aloof.

The show is sensibly written, and even its main characters have shades of grey.
4MSP works because of all this and because it feels like a good gossip session with a bestie, or flipping through a really good issue of a glossy fashion magazine.

It’s a guilty pleasure, like eating a bucket of ice cream. It doesn't nourish, but it’s so tasty.

The criticism, I agree with Nupur, is silly and misplaced. At which point she declares, “It’s a great chapter in Indian feminism”. Behen, thoda zyada ho gaya. Have do-teen shots, please.