Entertainment   TV  17 May 2017  Nia Sharma refuses to be shamed any longer
Entertainment, TV

Nia Sharma refuses to be shamed any longer

The actress cannot wrap her head around the fact that the 30-second steamy kiss scene with another girl created such a furore. 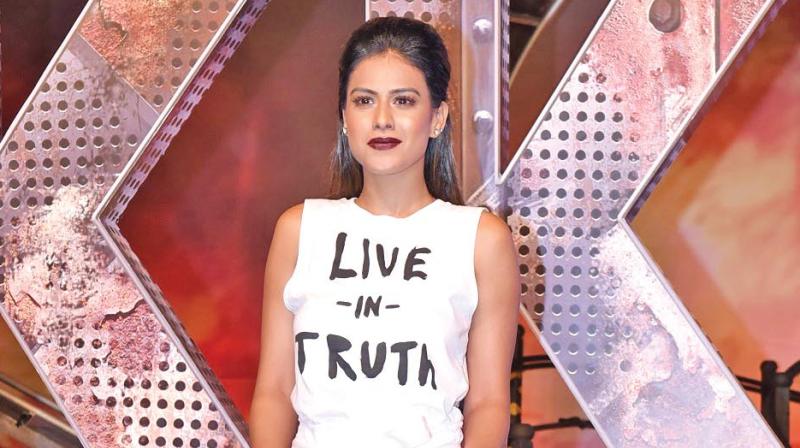 A few months ago, when television actress Nia Sharma posted hot black and white photos from a shoot, she was trolled and slut-shamed. Instead of cowering down, the actress gave a cock-a-snook reply, by courageously posting the video from the same shoot.

In yet another episode now, the actress seems to have earned the hatred of trolls. The reason this time is her kissing scene with another girl for Vikram Bhatt’s web series titled Twisted. Yet again, Nia is unfazed by the unsavoury feedback she has been receiving.

The actress admits that the slut-shaming episode has given her a new perspective of living life on her own terms. Nia refuses to cower down to the act, or her fears. She says, “I won’t be shamed anymore. I will shame those people instead.”

According to Nia, it’s good to be in the news for whatever reasons. “I cannot pretend that I am not enjoying the attention. Being popular is a good thing, so I am happy in a way, but this was not the idea,” she says. Nia adds that even though the slut-shaming episode was extremely negative, she still owes it to the media for supporting her and writing good things about her.

The actress cannot wrap her head around the fact that the 30-second steamy kiss scene with another girl created such a furore. “I have no idea what the hue and cry was about! I don’t have to give an explanation to anyone, but I want to thank everyone by talking about it and making it so popular,” is the actress’ tongue-in-cheek reply. Nia says that she is experimenting big-time with herself, her look, and the whole body. “It will go well sometimes and bomb at the other times, so it’s all right. All these things don’t even bother me,” says she.

The actress has been slammed several times for her in-your-face fashion sense, but all the criticism seems to be making her stronger. “Yes, my fashion sense is outrageous, but I am a rebel. I am young and still growing up. Maybe at 30, I will look back at my mistakes, but it will all be on me. I will be responsible for the way I look.”

Nia is conscious that people do not always agree with what she says and does and she has been mocked about the way she dresses a number of times. “It doesn’t bother me one bit. I don’t take a stylist along to dress me up. I pick up my own stuff and  I love what I wear irrespective of the reaction I get. I will continue to wear whatever I like,” she says.

It’s derring-do time for Nia, who is a contestant on Khatron Ke Khiladi. She’s gung-ho about the new assignment. “If it was about being a great performer, they would have got the best of sportsmen on the show along with Geeta Phogat. They have got people like us who have fears,” she says. “We will either overcome the fear or cry and give them funny drama. You never know, I might meet a new Nia there,” the actress signs off.