In the run-up to her big stage debut alongside Coldplay, Ananya Birla talks about all things music. 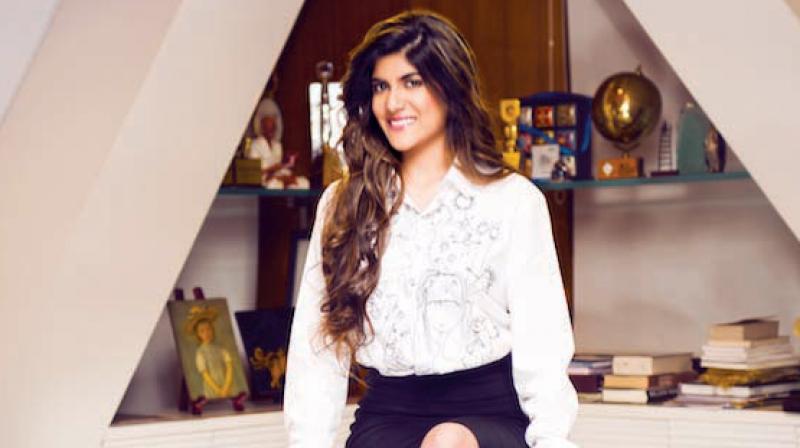 The scion of one of the country’s biggest industrial families, Ananya Birla has made far and few appearances in public. Kumar Mangalam Birla’s daughter had been elusive to the paparazzi all these years, but this week has been different. This week, the young entrepreneur has been around the country, promoting her debut music venture — her single, Livin’ The Life. The title, one may say is rather appropriate, given that the 22-year-old is heading straight to one of the most coveted stages, just a week after her debut launch. She will be crooning alongside everybody’s favourite British rock band Coldplay at the Global Citizen India concert to be held in the city today.

“This would sound clichéd, but my parents have been my biggest support system. I am sure they knew way before me that music was something very close to me. Their encouragement has been essential in this transition and I hold it very dear. My parents wanted me to achieve all my dreams — they wish me the best. And finally, their love conquered my fear of venturing into this,” says Ananya, who started out as an entrepreneur with a micro-finance start-up and a luxury e-commerce venture.

Despite the privileged background she hails from, Ananya insists that until her video started trending in the online space, she was just another girl-next-door, with just her ‘guitar and a notepad’. “I used to be locked up in my bedroom for hours, just listening to music, making some of my own, doodling and writing poetry. Music has influenced my life and is one of the most treasured things for me,” she says, adding, “Music speaks a universal language and for me, it is extremely important to stay connected to it. My sole intent is to spread love through music — to let people know the power of music.”

Ananya, a student of economics and management at Oxford University, says that she had her first brush with the stage while she performed at gigs in London. “After my day at the Uni winded up, I used to go and perform gigs — I used to look forward to playing in front of an audience. It was when people came to me and gave me positive feedback that I got the confidence to pursue this as a dream,” she enthuses.

And that is why, Livin The Life isn’t a one-off venture, she assures us. “I am completely invested in my music — committed to it full time. But, at the end of the day, it is a creative process, and with that there are no specifics. So, I can’t give you a specific time, but an album is definitely on it’s way,” she affirms.

The song is the product of a year long process with American music producer Jim Beanz, who has also produced the soundtrack for the popular American Fox TV series Empire. Jim has previously worked with international popstars such as Demi Lovato and Nelly Furtado to name a few. And so, pop elements are prevalent in Ananya’s single. Unsurprisingly, pop music is also her preferred choice of music. “My taste in music depends on my mood. If I’m in a chill mood, I prefer listening to something along the lines of Ed Sheeran’s Photograph, if I’m in a mellow mood, I prefer something like Hozier’s Cherry Wine. If I want to dance, I listen to Meghan Trainor, Katy Perry, Justin Timeberlake,” she lists.

Her song Livin’ The Life resonates with her idea of spreading love and peace.

What does she think of the current music scene in India though? “There are so many people genuinely invested in nurturing English music talent right now. With this, upcoming musicians are going to find the right direction,” she smiles.

Ananya is sure about keeping her music a constant in her life. Be it living as a popstar or an entrepreneur. She also points to concentrating on her organisation, One, which aims at making music available to one and all.