Pushkar, the tiny township that does not really qualify to even be called a town has an ancient link with spirituality and music. 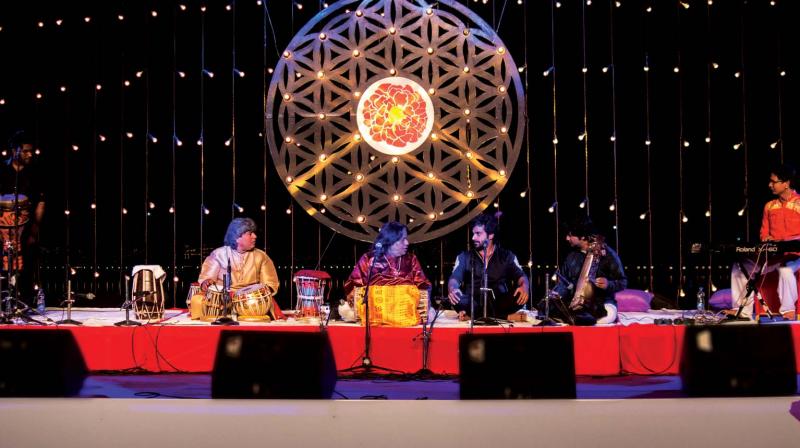 Pushkar has a link with sufism, spirituality and music. The music experience is carefully curated at the Sacred Pushkar that includes Carnatic music, Western music, Sufi, and Bhakti music among others.

Pushkar, the tiny township that does not really qualify to even be called a town has an ancient link with spirituality and music. Said to be the spot where the creator himself, Lord Brahma performed a sacrifice through fire (yagna) according to mythological belief, it has retained its importance as a pilgrimage despite being destroyed in the 16th century by Aurangzeb’s armies. All the 52 ghats, that today circle the Pushkar Lake, with innumerable temples, were built around 300-350 years ago. One of the main temples to Lord Brahma in Pushkar is still the venerated spot where many Hindus still come to offer obeisance to their ancestors (“pind daan”) during the “shraadhs”(the fortnight of the waning moon, in the month of Ashwin, before the holy Navratri).

The link with music is through Lord Brahma’s consort, Goddess Saraswati, the Goddess of Music and Learning. It is She who is also said to have created the “devanagari” alphabet, the script of Sanskrit. Every year even now Saraswati Puja is held at the onset of Spring and is a day when all students of the Arts worship the Goddess and seek her blessings, as well as hail their Gurus.

Delhi based Teamwork Arts, which today has a global presence in the world of the Arts, being associated with events promoting Literature, Music, and Theatre in Delhi, Jaipur, Banaras and of course abroad has for the last 3 years been promoting Pushkar as a spiritual and well being destination. The 4th edition of The Sacred Pushkar will be held in Pushkar from 12-14th October, and as usual will present an all encompassing holistic experience, combining physical wellness, through various forms of Yoga and Therapy, meditation, music linked to spiritualism, and even food considered “saatvic” (pure).

The wellness programmes include Craniosacral Therapy by the world famous John Wilks, and Vimla Rao, Bowen Therapy by Lynette Bath, Marma Therapy by Sunil Joshi, and Ayurveda therapy by Dr Pratap Chauhan. Kavita Devgan will hold sessions on Healthy Eating and Nutrition. There will also be an Organic food bazaar.

The music experience is carefully curated — including Carnatic music, presented by Bombay Jayashri, “dhrupad” (the oldest form of North Indian classical music) presented by Pt Uday Bhawalkar, the traditional instrumental gharana descended from Tansen, the “Senia” Shahjahan-pur gharana being represented by young sarodiya Debsmita Bhattach-arya, Western music from Bulgaria represented by the Bulgarian National Folklore Ensemble with Philip Kutev. Folk music will be presented by the world famous Nathulal Solanki, who will also hold a “nagada” (percussion instrument) workshop on the Lake banks.

Bangalore’s popular singer Bindhumalini will be collaborating with Vedanth, who was excited about performing in Pushkar on 13th morning — “Pushkar is one of the holiest places in the world. Teamwork is really “celebrating the arts” by having music festivals at such amazing locations and we are delighted to be part of this celebration.

We are looking forward to interacting with the amazing musicians who are performing at the festival, and sharing our music with them. We have composed a special set just for this festival, and will be performing songs written by the mystic saint poets from the Bhakti and Sufi traditions.”

Bombay Jayashri, popularly called the “Nightingale of the South” is well known for her preference for singing in temples and holy spots. She brings a serenity and energizing ambience to her presentations; of course her liquid molten golden voice is incomparable.

Talking to her about her first time presence in Pushkar, the vocalist was upbeat. In her words “Music is the ideal way of connecting with the Divine one, it helps to elevate ones consciousness. Music festivals focussing on what is sacred, from Fez, Morocco, to our own festivals for Navratri, and Urs are well known, and getting increasingly popular. I feel The Sacred Pushkar is not limiting itself only to music in creating a holistic spiritual experience. There is no better place than Pushkar to try for this. I am looking forward to performing on the holy Lake, and have tried to put together an unusual repertoire”.

The Sufi and Bhakti tradition of the Punjab, alive today through the compositions of the Saint poets Baba Bulleh Shah, Baba Farid, Shah Hussain, Sant Kabir, Sant Namdev and others will be given voice by the popular Nooran Sisters. The Sikh Guru Granth Sahib, a compilation of the “bani” (sayings) of the Sikh Gurus, also includes the sayings of these Saints.

Pushkar has a link with the Sikh tradition as Guru Nanak prayed there, and after him Guru Govind Singh rested in Pushkar during his skirmishes with the Mughal forces and till today there exists a “ghat” named after him; Govind “ghat.” The Gurudwara in Pushkar till today attracts scores of Sikh devotees. The powerful voices of the two sisters combined with their electrifying stage presence is the concluding act of the festival on 14th night.