Understandably, other than his charismatic and prefect body, there’s not much to go gaga over his talent accessories. 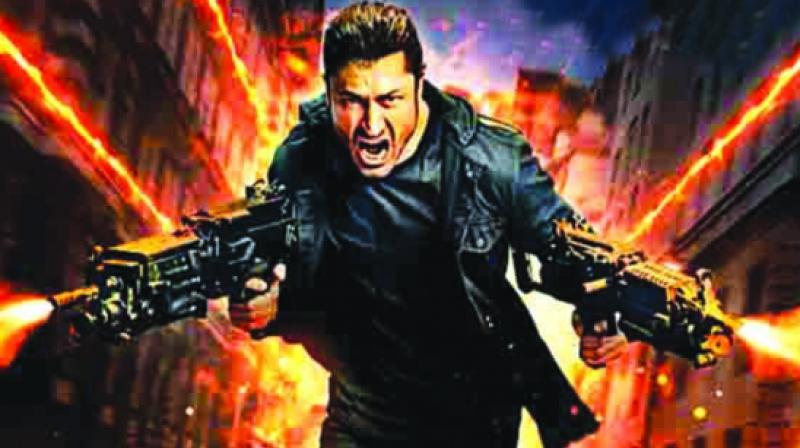 Vidyut Jammwal is one actor who is best suited to fight, kick, slide, whirl, chase, fly in the air, and do staggeringly splendid stunts few among Bollywood stars can match. Filmmakers too love to cash in on his sculpted body and make him the hero in films that deal with a semi-realistic storyline. And so, as a single man army in nearly all his films, his individual efforts as the good guy are enough to chase and catch criminals who pose a threat to his homeland.

As the commando Karanveer Singh Dogra in the action thriller Commando 3, he adds yet another one of his capabilities as the unstoppable patriot to pump up action to the maximum, and wrestles with pehelwaans who trouble young schoolgirls.

His acting proficiencies are well defined in the primary manoeuvring technique he invariably applies in a solid punch of his fist to the right guy (the bad guy in the film, of course!). But make no mistake: he is always on the right side of the law; never ever morally wrong, though he sure is someone who takes ample liberties by being unlawful himself.

In short, he is a giant among mere mortals, not just physically, but figuratively too.

As expected, in this Aditya Datt (who is remembered for the Emraan Hashmi-Tanushree Dutta starrer Aashiq Banaya Aapne) directed movie, it is merely his blows and combative attacks at the enemies that take precedence over elements like characterisation or complex plotting. Understandably, other than his charismatic and prefect body, there’s not much to go gaga over his talent accessories.

Probably tired and having exhausted all themes that this genre could have, Datt plays it safe here: He constructs the present-day Islamophobia spread across worldwide as the central premise to camouflage his unskillfulness to script a believable plot, and manages to give us a 133-minute film that focuses more on Jammwal’s muscles than his acting potential.

The cool guy Commando Karanvir Singh Dogra (Jammwal) is called by the Indian handler (Tailang), who has a direct telephonic link with India’s defence minister (no less!), to go on a secret encounter mission to London with two accompanying encounter specialists, the British Intelligence agents — Bhavana Reddy (Sharma) and Mallika Sood (Dhar) by his side for support. He is a man in a hurry: The indoctrinated Indians (all Muslims), are on a mission to destroy peace in India as they plot much worse than 9/11 terror attacks in as many as eight Indian cities.

Religious fundamentalist Buraq Ansari (Devaiah) masterminds, and is determined to take on any wrong against his religion but lives in a posh apartment in the UK. Needless to mention, Dogra is much smarter than anyone one could imagine, and could easily give his British counterparts a harrowing time locating him, let alone outmanoeuvring him. As he, along with Reddy, Sood and another BI agent Arhaan (Sumeet Thakur), locate Buraq, a cat and mouse chase begins in the bylanes of London over rooftop buildings and hideouts. That Karan can overcome any challenge that may pose a threat to him is a foregone conclusion as his posse fearlessly treads territories to locate Buraq, who, by the way, is quite easy to trace. His divorced wife Zahira (Feryna Wazheir) and son Abir (Atharva Vishwakarma) lead normal lives but live in mortal fear of him.

The success of the first two in the Commando series must have prompted producer Vipul Amrutlal Shah to go for the third franchise, and instead of risking a new venture, he must have thought of reaping the benefits to exploit the pretty muscular Jammwal to carry on with a tried and tested formula in the fast-changing tastes of the masses. Datt’s action hero may have few universally definable traits, but that he must always be ripped, and be easy on the eyes and be ready to smugly spit out a semi-comical one-liner if need be, are safe bets for two-hours long of entertainment.

In a film that has the action /fight choreographers and coordinators more to do than the director, Jammwal as Commando Karan relies on his single trait: he says everything not by articulating anything but by doing (read: fixing, resolving) plentiful. And though, in the midst of countless gunshots, cars getting smashed and gory coldblooded killings, not much drama emerges as an edge-of-the-seat thriller.

I don’t think any other Bollywood hero who at any time wants to have a go at being an action hero would want to compete with Jammwal. With his ensemble of fast-punching combinations and spinning heel kicks, he embodies the ethos of individualism and self-determination so extremely that the two women (both Sharma and Agira) despite displaying their agility and great fighting skills, get reduced to vying for his attention. Commando doesn’t even look at the two sexy girls romantically — for him, his mission is everything, though assuming that he would marry both, one even asks the other, “Which side of the bed would you sleep?”

Jammwal, with his effortless cool and nimbleness does a routine job by now, but if there’s one actor who seems to be enjoying playing the wicked, ruthless bad guy, it is Gulshan Devaiah as Buraq Ansari who scores over everyone else.

To be fair though, the director uses Jammwal’s character to oppose, contest and fight in ways that relate directly to the main driving force of the story — he only uses his muscle power. Even in the modern age of action movies where we have a host of CGI driven sequences, we don’t have a star actor who could stand out as a replacement for the cool dude Jammwal. So what if he isn’t a great actor, he is definitely a superstar in his own right without whom this particular genre would feel empty. And since as a protagonist he is expected to make use of his primarily fighting skills to achieve his goals in a story, he knows nothing better than beating up guys. He also doesn’t have the patience or skills for any other method, and is running short of time. That’s Commando for you, who already must be planning his next move, er... next film!