The Least of These movie review: Staines film digresses from political reality

What follows in the end is so horrific post his actions, sparking a tragic event that was felt around the world. 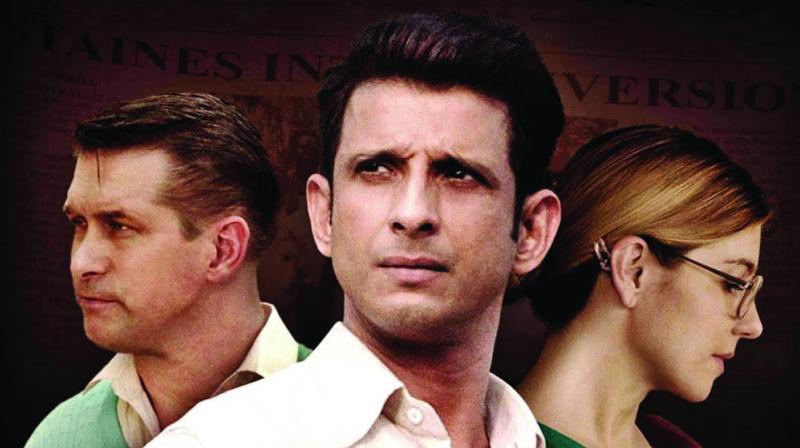 As the film shows, it is the journalist and his naïvete and frivolity that led to the murders.
Rating:

The politics of India may claim to take place within the framework of the country’s Constitution, and the federal authority of the Election Commission in the Indian polity may be termed unbiased and independent, but the recent spate of film releases as propaganda films eulogising the present regime leaves us in utter disbelief. While revisiting the gruesome murders of the Australian missionary and two children in 1999, one would instantly expect the setting ablaze of three lives by members of the Hindu fundamentalist organisation, the Bajrang Dal, to be highlighted. Based on a true story and shot on location in India, The Least of These attempts to illustrate the power of love, hope and forgiveness to overcome hate.

Being based on an incident that is only 20 years old and has many pieces of evidence, one would have expected the film to be a chilling retelling of an account that shook the world. But instead, the film does not even refer to some accurate information for us to recall the incident that is still fresh in our memory. The film simply glosses over the fact that it was the Hindu fundamentalists who set fire to Staines and his sons, aged 10 and six, as they slept in their station wagon in a remote village in Odisha on January 23, 1999.

Strangely, maybe since elections are round the corner, director Aneesh Daniel plays it safe and doesn’t even so much as mention in passing the identity of the perpetrators of the heinous crime.

The story of Graham Staines has been such that it doesn’t need any other factual details to weave into the 112-minute social stigma so starkly present not just in rural India but also in the most urban landscape of the Asian subcontinent: leprosy. During the political and social turmoil that saw India’s social fabric disintegrating in the 90s, a journalist, Manav Banerjee (Sharman Joshi), moves with his pregnant wife to the state of Odisha to look for greener pastures and the hope of a better life with the promise of a lucrative career. After bagging a job in a newspaper whose editor speculates the local Australian missionary, Graham Staines (Stephen Baldwin)’s illegal involvement and proselytisation of leprosy patients to Christianity, Manav agrees to investigate further. As he delves deeper into the abyss of a series of startling revelations, he finds it difficult to believe at first, and, later, even harder to come to terms with it. Oscillating between his sense of duty, he dithers over his commitment towards his pregnant wife Shanti (Aditi Chengappa), and his nose for investigative journalism. Manav is left with no choice between his own ambition and the truth. What follows in the end is so horrific post his actions, sparking a tragic event that was felt around the world.

The Least of These needed to have blended elements of fictional characters, and would have on its own, recounted the horrors that turn into tragedy by all those who many in our country believe is their legitimate right. That some members of the Christian faith have been involved in conversions may or may not be the hard reality; what is shockingly worrisome are the complete denial first, and subsequently, the culprits getting away scot-free.

The protagonist in Manav is a committed scribe who is unaware of leprosy and how it is not contagious. When he is confronts Staines and accuses him of breaking local laws regarding religious conversion, he begins to get into the depths of the menace that has lied buried for years: the local apathy and hatred. Manav also learns that while people are free to change their affiliation, missionaries are not allowed to offer money or other inducements to prompt a conversion. His initial distrust in Staines is soon converted to admiration, and Staines wins him over with his complete dedication and commitment to the place as also to the disease and treatment. Later it is Manav’s inadvertent helplessness and juvenile handling of the local residents that result in Staines getting killed.

If you are looking for a recreation of history in this film, you are bound to be disappointed. The main accused for the ghastly murders, for which Bajrang Dal member Dara Singh continues to serve a life sentence, is missing in the film that is based on a real-life incident. As the film shows, it is the journalist and his naïvete and frivolity that led to the murders. And, since the story sounds unconvincing, Sharman Joshi too suffers from being unconfident in carrying forward the film on his slim shoulders.

Tags: sharman joshi, the least of these movie review