Article 15 movie review: It’s a triumph for the team!

Khurrana leads the team with the right blend of authoritarian flourish, understanding and kindness necessary for the role. 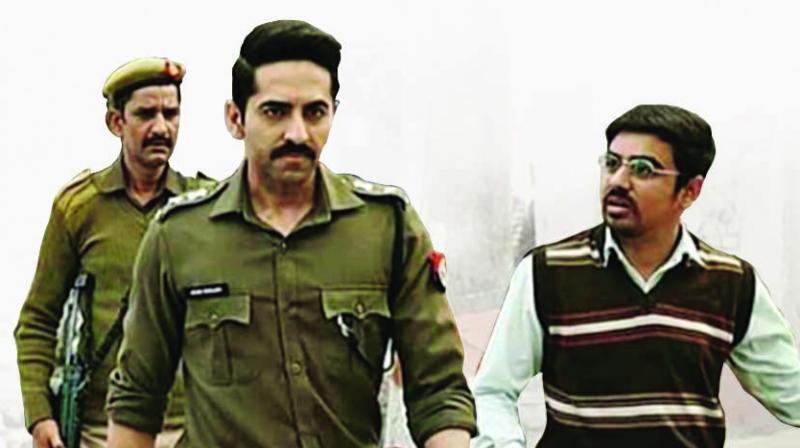 History has it that class politics has been an age-long reality in most nations of the world where there is a constant struggle for power and relevance between the different social classes.
Rating:

In a crucial scene from the film Article 15, a police officer (Ayushmann Khurrana) asks his subordinates one by one what caste they all belong to. As Brahmdutt (Manoj Pahwa) says he is a Thakur, his driver Chandrabhan Singh (Subhrajyoti Barat) reveals his Rajput lineage, another junior member Jatav (Kumud Mishra) discloses himself to be the son of a sweeper, while another assistant Mayank (Ashish Verma) exclaims he is a Kayastha, the film gains momentum as an important narrative though the same query asked by the officer is subsequently held against him as a deliberate attempt to encourage caste-based politics within workplace.

The stark contrast between the haves and have-nots that has always existed in our society often results in bitter struggles between them, more because either one or the other exerts pressure and stokes tension. History has it that class politics has been an age-long reality in most nations of the world where there is a constant struggle for power and relevance between the different social classes. But in India, the higher and the lower classes are strikingly contrasted, more so, with the law enforcers and wily politicians having their way to suppress the lower classes.

Set against the backdrop of the Badaun gangrape and murder that shook the nation in 2014, Anubhav Sinha’s Article 15 is an investigative crime drama based on true events, and is based on Article 15 of the Indian Constitution, which prohibits discrimination on the grounds of religion, race, caste, sex or place of birth. As stark and gritty as it can get, the film focuses on the socio-political situation in the state of Uttar Pradesh in India, where the lives of police officers remain most unexciting only because they all are bound by the commands of the powers that be, and discrimination — whether related to caste or race — is rampant everywhere.

When IPS officer Ayan Raman (Ayushmann Khurrrana) gets posted in the small town of Lalganj, he has to grapple with everyday dealings, first with shock, then with indignation, and finally shows enough patience to tide over minor hurdles to his overall grander plan of cleansing the system of the overbearingly repressive established order.

Will one officer who embarks on a journey of discovery and purging the system bring about the required change?

Almost immediately after assuming office, Ayan notices strange things unfolding one by one: His one-time friend and fellow civil services aspirant Satyendra (Akash Dabhade) is seen lurking in the background, and avoiding eye-contact with him; a dalit girl Gaura (Sayani Gupta) restlessly enquiring about her missing sister at the police station even as the bodies of two other missing minor girls are found hanging from a tree, and a general insouciance on the part of his team.

Stirred by his journalist wife Aditi’s (Isha Patel) unflinching support to dig deeper, Ayan feels that there is an ominous warning veiled in Brahmdatt’s and Jatav’s constant brushing aside of the third missing minor girl. When Brahmdatt cautions and alerts his senior Ayan, there is also an underlying motive that exposes his being in cahoots with both criminals and superior officials who too seem to have a political axe to grind.

Investigating further into what turns out to be an abyss, Ayan gets to know about Gaura’s boyfriend and leader Nishad (Mohammed Zeeshan Ayyub) who has gone underground, and looks all the more determined to get to the bottom of it. During his probe, he uncovers more muffled voices that refuse to come out in the open, and learns of the enormity of the caste barrier and the resultant politics around it in the country.

Khurrana leads the team with the right blend of authoritarian flourish, understanding and kindness necessary for the role. Not once does he overdo it, nor does he look gallantly heroic to overshadow others. The supporting cast comprising Manoj Pahwa, Kumud Mishra, Mohammed Zeeshan Ayyub, Isha Patel, Nasser, Subhrajyoti Barat excel in their respective characters too. But the credit must be accorded to both writer-director Anubhav Sinha and his co-writer Gaurav Solanki for the less preachy tone and tenor of the 130-minute film. Sinha also deserves special mention for aiming to highlight an issue rarely taken up in any Hindi film — the plight of the marginalised communities. Sinha rightly shows the men as perpetrators of a crime being exempted and going unpunished with a horrifying sense of impunity. He points out that such people justifying any wrong meted out to the sidelined communities are an entitled as the rich and the privileged, in this case, the higher castes. On the other hand, he also lets us into the
world of the ones who are not, and may be abusers, but they could also be the ones going about their daily chores with little concern or empathy, and thus, allowing offenders to go scot free.