The biggest disappointment is its music: not a single track sounds exciting enough to be called a part of a music band! 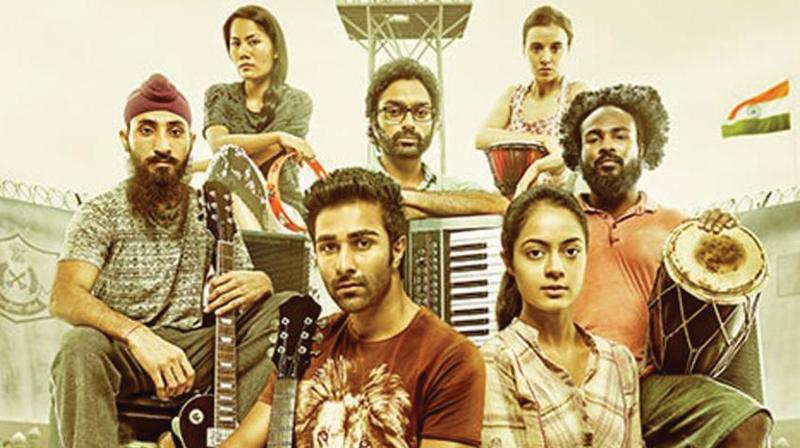 A still from 'Qaidi Band'
Rating:

In the world of films, there are subjects that look very interesting, may be, on storyboard, but when it comes to the execution of these stories, they fall flat. Well, not necessarily always, but many a times.

Habit Faisal, who showed promise with his first film Do Done Char, made us believe that he understood the middle-class milieu well. Sadly, a few films later, he seems to be still struggling to give us a well scripted entertaining film that stands out with an original appeal of its own. I am stressing on the word, ‘entertaining’ since that’s what director Faisal seems to be doing: targeting at an audience who look for entertainment. Nothing more!

His latest, Qaidi Band, could have been a thrilling tale of undertrials brought together to form a band in jail for a social event. Stringing together a motley mix of young and old men and women, it could have given us what many of us shudder to think of the plight of some of these people who may be, wrongly or appropriately convicted of crime, and wait endlessly in jails waiting for justice to prevail.

As the lives of seven innocent under-trials (Aadar Jain as Sanju, Anya Singh as Bindu, Sachin Pilgaonkar, Prince Parvinder Singh as Maskeen Singh and Lin Laishram) revolve around the torture, unjust treatment and complete apathy at times, they get a chance to form a musical band in the prison when the Independence Day of India approaches. The song composed by them becomes a national sensation in the form of a new patriotic song. So far so good. But

Faisal didn’t have a convincing plot, and labours hard to spin a tale that looks so amateurish and hurried that at the end of the two-hour-long film you wonder if this is actually someone who has a number of films to his credit.

As their popularity grows through social media, they use their music to protest against jail authorities & the Indian judicial system. Eventually, hoping against hope, music becomes their only survival. But does it also set them free?

Using the songs of these band members, the film should have explored how these prisoners secure their release on the strength of their songs, and popularity.

Instead, a puerile plot leaves viewers wondering how on earth such a storyline could have been written. The end result is an emotionally vacuous film that merely sermonizes. It pretty much ends in a predictable way and doesn’t stay with even during the time you spend in the theatre.

Newcomers Aadar Jain and Anya Singh show immense. While Jain shows all signs of focusing only on being a star (he is showman Raj Kapoor’s grandson) and looks confident, it is Singh who could be moulded in the category of spontaneous film actors.  That is, if she gets the right roles.

The biggest disappointment is its music: not a single track sounds exciting enough to be called  a part of a music band!