In Arjun Patiala, the opening scene holds some promise with its premise. 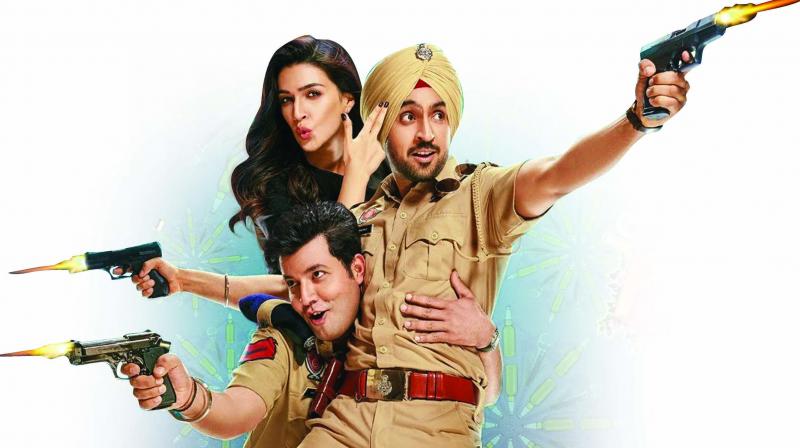 No chemistry seems to be working between the actors (Dosanjh and Sanon).
Rating:

Actors who are in a hurry to arrive and also have benefactors who back them — possibly unconditionally — may pride themselves as the prized beneficiaries of all the love and affection that their patron (read producers) shower on them. But do they also realise that it is not by being in the good books of many that their careers would continue to flourish? Diljit Dosanjh, who has had a successful run at the box office (Udta Punjab, Phillauri, Soorma) besides being a top notch star in Punjab, just plays his usual self in this week’s release — Rohit Jugraj’s Arjun Patiala — and doesn’t even bother to devote even half an effort to deliver lines that are anyway so silly that you wonder why you would want to sit through a 110 minute film?

Since time immemorial, Bollywood has portrayed the men in uniform, particularly the police, rather indifferently. Almost the entire police force is shown either holding authoritative power using their stentorian voices to good use, or have mostly been used to represent the menace of growing corruption where they always form a nexus with crime and the criminals. They would also be fashionably late and reach any crime scene only after the benevolent hero had not just solved the imbroglio, but in most cases, meted out just desserts too.

In Arjun Patiala, the opening scene holds some promise with its premise. A film is being planned as writer-director (Abhishek Banerjee) and producer (Pankaj Tripathi) take you through the valour and matchless saga of the bravery of the police force. ACP Arjun Patiala (Dosanjh) attempts to dispel such stories and at the behest of his boss IPS Amarjeet Singh Gill (Ronit Roy) decides to make his city Ferozepur in Punjab a crime-free place. He is ably supported by DCP Onida Singh (Varun Sharma). They decide to try out a novel game to weed out crime by playing both ends against the middle, and allowing goondas to take on their rivals and kill one other in the process. Sounds interesting? Well, a reporter named Ritu Randhawa (Kriti Sanon), who is on a mission to report crime for the television channel she works for, smells a rat.

As characters in this supposedly comic caper are merely demonstrating and developing a line that the producer (Tripathy) in the opening scene says with smugness, “Don’t bother to give me the script; for three generations I have never ever heard a script.” As you must have guessed it right — there seems to be no script in place in a film that also has Mohhamed Zeeshan Ayub and Seema Pahwa, and lest we forget, Sunny Leone doing the mandatory item song.

With not a plausible storyline, poor jokes overflow, and even the actors are given a free rein with little effort. In a somewhat chilling scene that comes out of nowhere, Ayub, who has been specialising in cameos and small bit roles of late (Article 15), is seen bumping off a dreaded criminal jokingly. While everyone around gets scared, he coolly walks off. Though nearly most of the film is inane, it becomes therefore, difficult to know which way the film is headed at this point.

No chemistry seems to be working between the actors (Dosanjh and Sanon). They’re just meaningless lines delivered with no energy (Sanon), or at times, adding extra liveliness (Sharma), that are more annoying than entertaining. A few songs forced upon the audience, instead of livening things up, get more annoying.