Akshay Kumar would like us to believe that anything and everything he doles out will get his committed fans’ obligatory assurance. 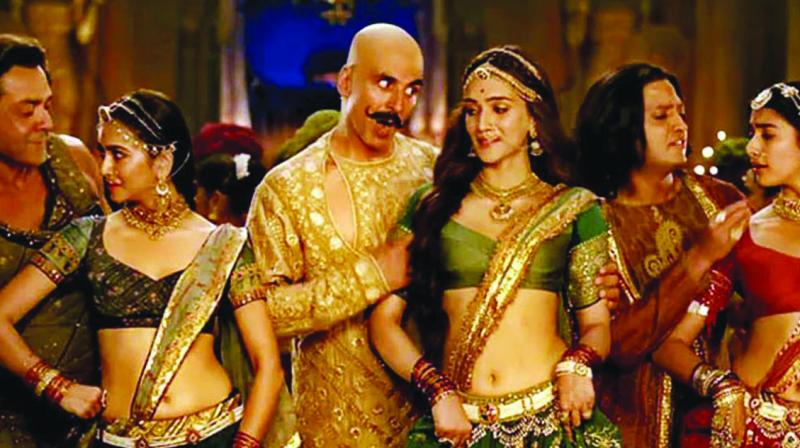 The Housefull series has had a successful run at the box office earlier.
Rating:

Akshay Kumar would like us to believe that anything and everything he doles out will get his committed fans’ obligatory assurance.

Bobby Deol would like us to believe that the ageing actor still has a few strands of hair left, and so he could jolly well try out a comic act to save his flagging career (did he ever have any?).

And Riteish Deshmukh, who hasn’t had a decent release in the last decade, is yet another one of those hopeful Bollywood actors who wants to cling to stardom, come what may. Not that any one them has any chance of improving their unsuccessful stint at acting left — it’s just that all of them have this last ditch effort to hold on to whatever remains of their respective careers.

That leaves us with the producer Sajid Nadiadwala and the director Farhad Samji. What does one say about them? In reality, the less said the better about the duo since they seem completely at sea trying to give a semblance of a film.

That sums up the premise that Housefull 4 seems to rely on: Let’s hang on to our past glory till its last drop and make the feeblest effort to embrace acclaim for all its worth.

The Housefull series has had a successful run at the box office earlier. A motley mix of a star cast in three of its earlier franchises, the films starring Akshay Kumar Abhishek Bachchan, Lisa Haydon, Nargis Fakhri, John Abraham, Shreyas Talpade to name a few, have all had fun playing silly characters in the past. And we all have also may be not enjoyed ourselves thoroughly, but have chuckled or giggled at some of the most puerile jokes that scriptwriter Sajid Khan and Tushar Hiranandani have tortured us with.

Housefull 4 has none of the chutzpah or a madcap assortment of scenes to sit through for its runtime of 145 minutes. In fact, Housefull 4 is not even a film. At best, it could be called a hodgepodge mix of characters with a few lines thrown in for good measure.

What do you make of the following?

A set of three brothers are due to marry a set of three sisters, until one of the brothers starts to realise that they are all reincarnations from 600 years earlier and the wrong couples are about to get married. You got it right! 600 years, it is. When a bald and debauched prince fantasized about a pretty princess and play-acted enough to woo her. In essence, he is only making all out efforts to appropriate his neighbouring kingdom, which belongs to her. Now this princess has two other sisters who get besotted by a guruji dance teacher and a bodyguard. Their hopes come crumbling down when a devious calculating mind of a man plays killjoy, resulting in the marriages not taking place and everybody getting killed in a bizarre accident.

When three middle-aged male brothers (Akshay, Bobby, Riteish) — one of them is nearly 60 — begin to pass off as young loveable happy-go-lucky souls all out to have fun with nubile sisters (Kriti Sanon, Kriti Kharbanda, Pooja Hegde), you do a double take at the grey stubble that one of the actors sports. Thankfully, guessing where the audience might be headed, the girls’ father (Ranjeet) admonishes quite early in the film with a “Tumhe sharm nahin aati? Apne se adhi umr ki ladkiyon se shadi ki baat sochte huye?” But that’s about it. Doing away with the beard and donning trendy outfits, they continue to act, behave and utter nonsensical one liners. That too, desperately. The girls, who are all smart and perfect shaped, also get fooled by their asinine behaviour.

It would still have been passable if the back and forth treatment of an apology of a script had given us some laughs, and a few moments to chew on. Going back in time, the story doesn’t even give us some complete scenes to a logical conclusion as the narrative itself loses sight of some of the drama and the mindless track that it succumbs to.

That is really sad about a film that is lavishly mounted, and has some other great actors in the supporting cast too, such as Nawazuddin and Johnny Lever, who try and infuse some sense into the most inane plot.

But the coveted position of The Most Moronic and Daft Character has to be the one who is all agog with excitement to hog all the limelight. Obviously, it is Akshay Kumar and his machismo at work here. He being the lead, goes about his performing role most enthusiastically, and delivers mumbo jumbo in the name of dialogues, and still expects us to comprehend them too.

Deol, returning from deadwood, has even forgotten how to face the camera, and Deshmukh attempts at encashing some of the laughs he had generated in many of the double entendre lines he had mouthed in many of the potboilers in his career.

The women are all pretty and make the best use of their sexy but brainless roles. All three look their best, though at times, look uninterested and indifferent, and even make us believe that they’d rather be paired opposite some younger lot of heroes to achieve what they obviously have set out to — celebrity, stardom and precious little else.

If you have nothing better to do, and must watch a film, go watch a repeat of your favourite television show, no matter how taxing it may get. Wasting your time, money and energy on a film like Housefull 4 will possibly make you swear to be off cinema for some time at least!