There is some music damaging the serious tone, and Abraham, who may look fit enough for the role, struggles to dramatise a few emotions. 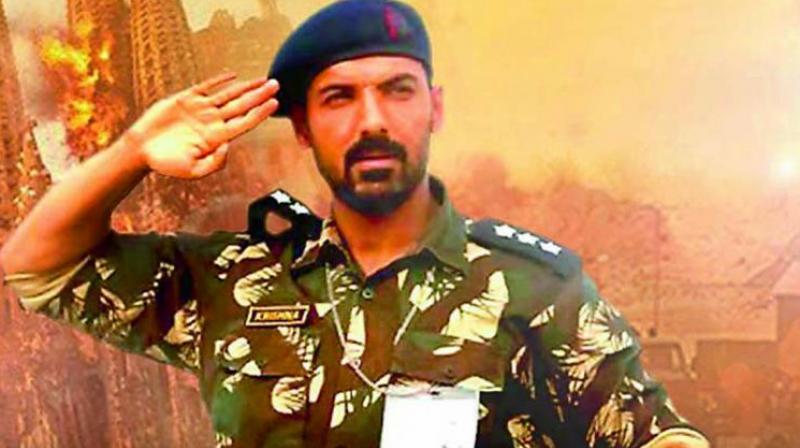 John Abraham in the still from 'Parmanu'.
Rating:

History may be biased in many ways, what with different sects, historians and political dispensations having their own versions to outline their own accounts as “victories” that they believe should be etched in history for posterity. And since many factual details get clouded and fuzzy over time, such liberties — which are, in reality, distorted facts — get passed off as truths in the long run.

These, and some other facts, are compromised on celluloid, not because of any authentic source corroborating them but only because a few of our filmmakers have scant regard for authenticity and incorporate bizarre changes in the name of creative liberty.

The premise of Parmanu: The Story of Pokhran is chronicled in the recent history. It’s not even that old for it to be blurred from memory. It is based on the nuclear bomb test explosions conducted by the Indian Army at Pokhran in 1998 under the leadership of late President A.P.J. Abdul Kalam, during the time of PM Atal Behari Vajpayee’s tenure. The film tells the audience about failures and hidden facts that no one paid attention to and brings out the unsung heroes of the experiment that put India on the map as global nuclear superpower. It goes on to suggest that had it not been the endeavours of one far-sighted IAS, who tapped the potential that India always had as a nuclear power, no one else held the key to the planet’s survival.

If director Abhishek Sharma wanted us to believe that a certain Ashwath Raina (John Abraham plays the lead member of the Pokhran nuclear test team) was the brain behind the nuclear tests, and all others who assisted him in his mission, merely followed his instructions, he shouldn’t have used the disclaimer that clearly says that the film is based on a true story. Raina, who plays an IAS officer, has all the qualities that one of India’s most admired heads — President A.P.J. Abdul Kalam possessed. Referred to as the man with “a plan called nuclear peace” that will help India compete with the United States, China and Pakistan, Raina offers a plan that fails due to its poor implementation. Soon he is suspended, and he retires to Mussoorie with his wife Sushma (Anuja Sathe) where he starts a coaching institute for aspiring civil servants.

Life has its own ways of doling out justice. And three years on, Raina gets a call from Himanshu Shukla (Boman Irani), the new principal secretary to the Prime Minister. This time Raina is handpicked for the covert mission that needs to be spearheaded by him. The secret project gets sanctioned to be executed by the few chosen ones, all of whom are given the assumed roles from the epic Mahabharata with specific challenges and duties. What one gets to know gradually is that the real challenge revealed is to showcase the unrivalled efforts under the leadership of the then PM Atal Behari Vajpayee, and his great success as the trailblazer of super power. There are moments when one feels cheated too when the United States, Pakistan and China, who are feared the most, are reduced to looking like dim-witted nations keeping an eye on the developments in India. The film sets into motion a chain of dangerous events that could cause devastating earthquakes and life-threatening solar radiation levels.

This academically presented film is shown using declassified military documents and footage that is targeted at inciting patriotic feelings among cinegoers who rarely get to see a detailed chronicle of the history of nuclear tests in India. In reality though, this 130-minute assault on the senses is less about misinforming the viewer with misrepresentation of facts and more about the unintentional humour that it rubs in: while all others like the US and Pakistan are fooled by the Indian intelligence, something as uncanny as the Indian agency coming out trumps looks unpersuasive and unbelievably far-fetched.

The bleak devastation that the failure of such a high-profile project could entail is glossed over with intermittent details of a persuasive hero’s single-minded approach to the mission. He looks driven with a sense of purpose but has all the powers that are required to execute such a plan. He looks supremely gifted, and the only time he looks human is when he is also shown ironing out differences in his domestic life, particularly his wife, who seeks answers to some difficult questions.

One particularly unnerving scene shows the many powerful men in the PMO defying the ban on nuclear testing and laughing at Raina’s suggestion to go nuclear. The film also includes footage showing the American President, the Indian PM and interesting devices for launching bombs and scenes of them being exploded in space.

The nuclear power theory places the viewer in the middle of crisis that could emerge from the failure of such a plan. And the team comprising Diana Penty as Capt. Ambalika, Vikas Kumar, Yogendra Tiku, Darshan Pandya, Zachary Coffin as Stephen and Abhiroy Singh, don’t look charged enough to be taken seriously. Even their task at hand seems easy going and there seems to be no urgency. A few scenes look like a group of people out on a picnic with a little bit of work thrown in here and there. The danger surrounding nuclear weapons, the fascination they inspire and the perverse appeal they exert, are all missing to make the story look complete.

There is some music damaging the serious tone, and Abraham, who may look fit enough for the role, struggles to dramatise a few emotions. He does try though, but is best left to fight and show his abs in the mandatory dishoom scenes!