Still the vital definitive crux is marked with slightly long-drawn-out juxtapositions that could debilitate the overall emotional impact of the film. 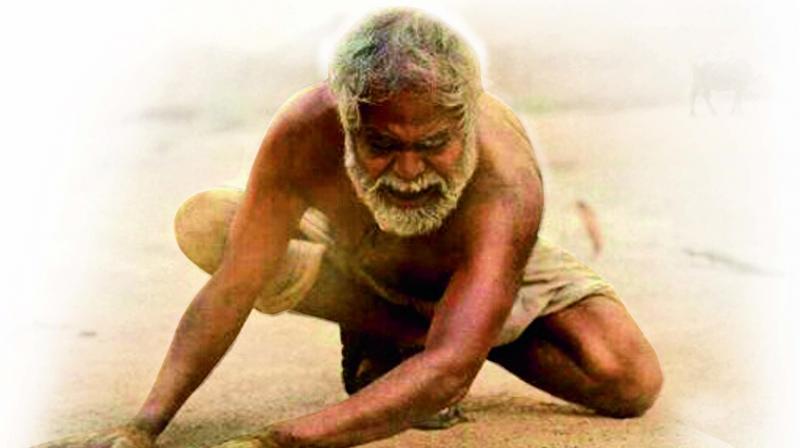 A still from the movie
Rating:

The city dwellers would never know what a farmer’s life is like. Unless one visits a hamlet like the one Nila Madhav Panda’s Kadvi Hawa exposes — Mahua — it is almost impossible to comprehend the complexities of rural India. And the multifarious problems the cultivators are inundated with. Recently, post the onslaught of pollution hitting us severely, while we, in urban India, may crib about environment-related issues and debate on the box, the hazards that climate change could bring with it remains virtually mysteriously unidentified among the rustic existence.

Taking the issue head on, Kadvi Hawa tells us a heartfelt human story languorously, though to be fair, the lazily built atmosphere adds the appropriate solemnity to the narrative. Significantly, that we are vulnerable and could be dangerously living in perilous conditions is communicated with utter care. Still the vital definitive crux is marked with slightly long-drawn-out juxtapositions that could debilitate the overall emotional impact of the film.

When the farmers, who are all in debt, don’t see a future for themselves right after drought has preordained an imminently bleak potential for their produce, the virtually visually impaired Hedu (Sanjay Mishra) is worried sick about the prospects of his son Mukund (Bhupesh Singh), who just doesn’t seem to get away from the clutches of loan recovery agent Gunu (Ranvir Shorey). For both Hedu and Mukund, the unspoken concern for each other, or the father-son relationship, is not explored to suggest a conservative bonding. Gunu is a dreaded man, who causes many to hang themselves due to their impoverished state and insufficient funds. Dubbed the “Harbinger of Death”, Gunu takes his job seriously so that he could bring his two children and wife to stay with him soon. His get-up-and-go drive pushes him to exploit the poor in this dry region with his reign of terror and clear their outstanding debts or face imprisonment.

Hedu visits the grimy dirty barren route to feel the unpromising and fruitless land all the more, and takes care of family buffalo Annapurna. For both Hedu and Gunu, a pact could go on to benefit them equally. Hedu is desperate and has a plan wherein his tip-offs to Gunu about any debt-ridden farmers acquiring money from any source.

Subtly at times and almost directly at another, the film touches upon exploitative bankers, agents, weather conditions, environmental issues, scanty harvest, rising debts, unpaid loans, the menace of super cyclone, total neglect and the insensitive government that combine to give us an agrarian crisis farmers don’t seem to recover from. In fact, for many, suicide seems to be the only panacea to their multifaceted worries.

Panda as a co-writer and Nitin Dixit as a screenplay writer intertwine a believable part of a rural India with dialogues, setting, characters and actors to give us a particularised 100-minute film. Right from the body language, clothes, the bare minimum kuchcha mud homes to concerns that are typically bucolic, the film looks as real as it gets. Considering (as we are informed) the script was based on true stories from drought-prone Bundelkhand region and the vanishing villages from coastal Odisha and Chambal region of Dholpur and Rajasthan, one can’t but get incensed at the apathy of our successive dispensations. Not much seems to have changed from the times of a newly-independent India in the late 1940s, and little transformation is further expected even now.

Camerawork by Ramanuj Dutta brilliantly captures the sombre mood in this often wordless and mostly-visual account.

If the film is a winner and is poised firmly, it’s on the strengths of its actors: Sanjay Mishra, Ranvir Shorey and Tillottama Shome. The accent of some of the actors, though, barring Mishra’s and Shome’s, slips, occasionally. Mishra’s deadpan expression as a blind man; Shome’s stoic resistance or Shorey’s very human approach complement the tone of the film to perfection.