With more characters joining in and yet another Happy as part of the lightweight storyline, you would expect a goofball comedy. Not really. 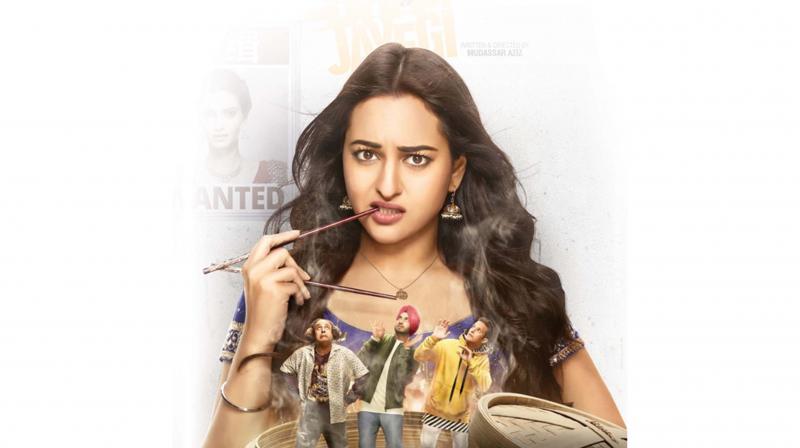 I am of the firm opinion that all sequels may advance forward to carry on with the rapid motion of a narrative action, but they must have a life of their own with a stand-alone marketability too. Although a follow-up film is conceived more as producers’ demands in the first place, to cash in on the success of the first franchise, and set cash registers ringing!

Whatever be the reason, the continuation of the film’s fate depends on the film moving ahead, and the audience getting their money’s worth, the second time around. I would rate Mudassar Aziz’s sequel to Happy Bhag Jayegi, titled in its giveaway name Happy Phirr Bhag Jayegi not actively bad, but simply forgettable. A wretched script that dodders on a sloppy premise doesn’t even get saved from cinema hall by the ever-charming Jimmy Sheirgill, or the debutant singer-actor Jassie Gill, though, they are the only two of the central cast, who suit their roles. The rest of the cast, including Sonakshi Sinha in particular, look deeply uncomfortable in their roles. Sinha, as the hapless victim of mistaken identity, gets her comic timing all wrong. Together, all of them are a disaster, going through the manufactured script with precious little freshness.

To be fair to the actors, they cannot be faulted. At least, not entirely. It’s Aziz who concocts a sequel where there wasn’t a solid basis for one.

In the earlier film, the eponymous free-spirited character Happy (Diana Penty), who was a bride-to-be from Amritsar, ran away from her wedding ceremony and inadvertently arrived in Pakistan, and was taken hostage in the local governor’s house in Pakistan.

Her creating a ruckus in the neighbouring country formed the crux of the film, and we had quite a few laughs along the way.

In its second instalment — I sincerely wish there isn’t any other in the offing if the writers can’t come up with something truly wacky — the original Happy is in Shanghai, and is married to her musician boyfriend Bagga (Ali Fazal). The businessman she was supposed to marry Daman Singh Bagga (Jimmy Sheirgill), along with Pakistani police officer Usman Afridi (Piyush Mishra), is abducted from his wedding and transported to China. His forcible confinement is part of a negotiated business deal between Pakistan and China.

Now that may sound more like a jumbled tale, and to get a complete low-down on what’s what, it would help to have watched the first film.

Anyway, viewers don’t have to look for answers here.

Another Harpreet alias Happy (Sonakshi Sinha), is a professor of horticulture from Amritsar, and is China-bound to deliver a lecture at a university. As luck would have it, a set of gangsters mistake her for the Happy they have been looking for at the airport, while the original Happy (Diana Penty) is misidentified as the professor.

Professor Happy and Bagga have had a similar fate: she too was dumped by her fiancé Aman (Aparshakti Khurana) just before her wedding, and travels all the way to Shanghai in search of him.

With more characters joining in and yet another Happy as part of the lightweight storyline, you would expect a goofball comedy. Not really. Aziz forgets that even if a basic idea clicks on paper, it must be padded up with a plot, no matter how silly it is. He scripts a bland drama without an ounce of smart liners. Obviously then, the result is less a film, more a tiresome exercise that fails to raise anything more than a chuckle.

The 137-minute film loses steam in its plot before it starts even as dependable actors like Sheirgill and Jassie Gill (as an Indian embassy official in China) try to liven up a dead script. The long-winded length could have been a jolly ride for the viewers had there been some animated chemistry between the performers; what one gets is too smooth, too foregone expressions that are neither romantic nor funny. There are moments when the leads (Gill and Sinha) indulge in flirting and sparring with the kind of insouciant talk-show aplomb, beaming at each other’s perfect skin.

Too bad since the film has all the trappings of the genre — good cast and spectacular locations; it’s the absence of any memorable joke that makes for a wholly unsatisfying experience.

Where does the problem lie then? It isn’t the self-effacing Sheirgill, who, by now, has perfected the Bollywood 50s and 60s parallel lead actor Rehman’s sacrificing act of allowing the main male lead to walk away with the bride. It isn’t Sinha, whose bright look is expected to burn brightly but fails to ignite the screen: It’s the half-hearted laughter that you have to settle with, while still hoping to come across a spark in a screenplay that has the earmarks of a project that has been fussed over by too many hands. Or so, it seems!