Shouting slogans and focusing on sayings, he makes an impression on everyone, and goes on to win many hearts. 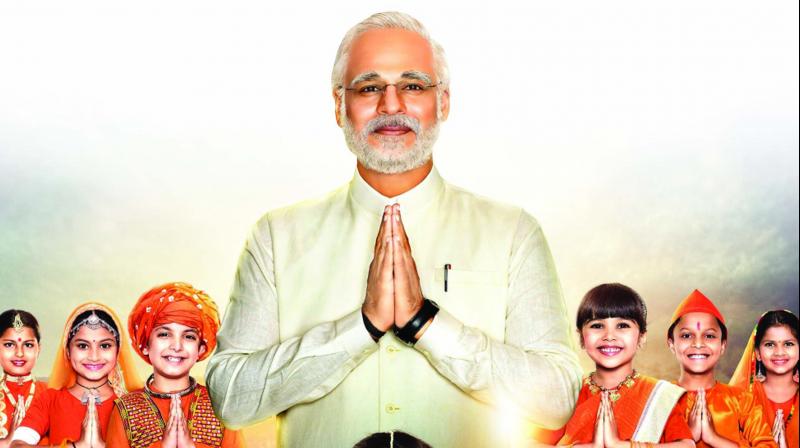 Whatever may have been the decision of the United States to not allow him a visa in 2005, or of his role in fuelling the riots, the film gives him a clean chit.
Rating:

Despite technical gloss and great production values, it is often the timing of a film’s release that could decide the fate of a film. With the NDA sweeping India in the Lok Sabha elections in 2019, one man who has become the most powerful man in India is Prime Minister Narendra Modi, and what better way to celebrate his victory than to have a Bollywood hagiography revolving around his life, that too coinciding with the release of a film based on his life at around the time of the election results?

Jointly produced by Suresh Oberoi, Sandip Singh, and Anand Pandit, the Omung Kumar-directed film PM Narendra Modi is all about Mr Modi’s life and his struggle to become a politician without money and resources.

Since the film treats its subject with undue reverence, it is Modi, and Modi alone, as the only character in a film that is designed to serve a political agenda, and the narrative finds a straightforward way to tell his story.

While the film attempts to highlight incidents that catapulted Mr Modi to popularity and fame as a child, it hardly brings out anything out of the man’s more private moments; it also reveals him to be tremendously popular, both as an influence and a son. And, so, right from the time the young Naren is shown as a school-going kid, he seems to have had his eye firmly focused on issues that receive applause from all his family and friends. Shouting slogans and focusing on sayings, he makes an impression on everyone, and goes on to win many hearts.

There are incidents that look ordinary but are highlights nevertheless to showcase him as someone spectacularly and truly “special”. And we see a number of scenes that try to prove it too. Sample some: His unmatched love for the motherland; his special concern for his mother (Zarina Wahab) who washes utensils for a living; or his noble gestures for his father (Rajendra Gupta) who is a tea-seller; all weave a tale of a larger-than-life character in the making.

Later, many of the factual details are interlaced and stitched together in the film to underline other qualities that make him stand out: his concern for the women of Gujarat who walk four miles to fetch potable water for their families, his hard work to get his fellow Gujaratis his delivery on a promise to offer business icon and industrialist Ratan Tata land in the state of Gujarat for the Tata group’s Nano project in only three days and his decision to look at FDI as investment that would lead to infrastructure and development for the people are seamlessly entwined in to his fast rise. Moving on to the phase of his becoming the chief minister, or dreams of reaching Delhi to make a mark are all moments that are supposedly true but make the film look servile. Mr Modi knows it all, and does no wrong. In a scene, he even teaches his Cabinet how to make tea as he blends tea leaves, sugar and milk in water to prove his cohesiveness.

But in the midst of it all, you wonder how co-writer Vivek Oberoi, along with Haarsh Limbachiyaa and Anirudh Chawla would touch upon the Gujarat riots? And so, treading cautiously, they take us through a long step-by-step approach to first the torching of the Sabarmati Ashram near Godhra by Muslims to finally how peace was disrupted as angry and agitated Hindus were out on the streets to avenge the killing of 59 people. Obviously, the sudden detailed explanation devoted to the controversial handling of the communal riots in Ahmedabad is an attempt at justifying Mr Modi’s “innocence” even as a television channel honcho who sides with the Congress tries to scuttle every claim made. For all those who are his unabashed fans, this would act as the final verdict. Mr Modi, in one scene, even reiterates, “The Nanavati Commission has exonerated me.”

Therefore, even if some of us would want to say much, we cannot!

Whatever may have been the decision of the United States to not allow him a visa in 2005, or of his role in fuelling the riots, the film gives him a clean chit.

In a scene where a Muslim man yanks off his child’s tabeez (locket) from his neck when he sees a Hindu mob approaching, and chants “Jai Shri Ram” to save themselves, you wonder what all must have taken place for both the communities to survive, and who, in reality, could have supported them!

With a linear storytelling format, most of the 135-minute film is bland and has scant regard for many truths and most of us would not get fooled by such claims. Since there wasn’t much to boast of the leader’s inspiring childhood, or any great occurrence that have could have helped us draw parallels with many of our leaders like Gandhiji, Patel and others, the script emphasises on some episodes and instances that look improbable and would leave you doubtful and unconvinced.

Oberoi tries to fit into Mr Modi’s shoes earnestly, but gets little support due to poorly written dialogues. Aanjjan Srivastav as Bajpayee, Manoj Joshi as Amit Shah, Boman Irani as Ratan Tata, Zarian Wahab as his mother, are all fine actors, but look like mere fellow passengers on a breezy train all in a hurry to complete their journey.

Whatever be the outcome of such deification of a life on screen, the film will be a part of cinema history, and future generations will swear by its contents, and maybe, put aside all dissent, if any, in the name of a chronicle that claims to have a tagline “Ab Kok Rok Nahin Sakta” (There’s no stopping him now!).

For his innumerable fans, this is a film that tells the gospel truth; while for all those avid cinema lovers, this is quite a slipshod biography that fails to give us an insight into what and who the real man is!