Baa Baaa Black Sheep movie review: This one is a cringeworthiness

None from the cast attempts to breathe life into this inane drama that loses track as soon as it takes off. 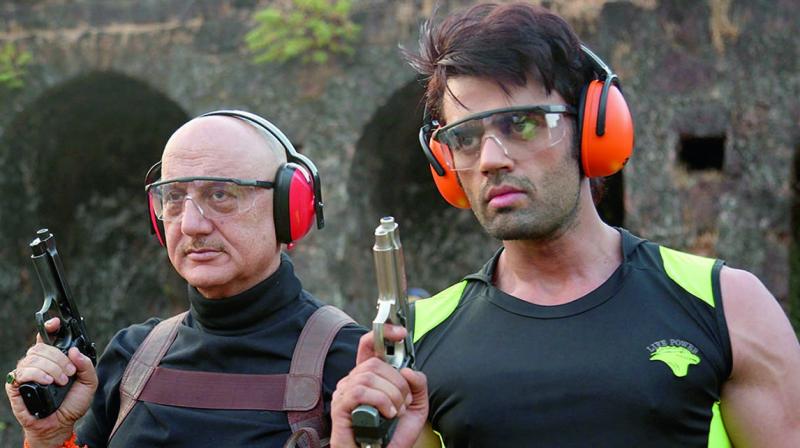 There’s an old saying that dying is easy while comedy is hard. This timeless maxim is best understood by nearly all the new Bollywood filmmakers today who might follow the Yash Chopra or Karan Johar formulaic form of storytelling, but know it very well that to direct a good comedy they would have to pour all their blood, sweat and cheers into their cinematic endeavours.

It’s the beginning of summer, and, that time of the year when a large chunk of cinema-going population will be headed to examination halls, and, so, some mindless entertainment — with emphasis on the mindless — cobbled together from various other movies will hit the screens. Well, mostly, not necessarily, every Friday release.

This Friday we all got really unlucky. Unforgivably so.

Director Vishwaas Paandya could have chosen either a comic caper or a thriller as his debut to have some noticeable feature about Baa Baaa Black Sheep. Instead, he clubs two genres — comedy and some cheap thrilling elements — to give us a film that contains an assortment of plots, a lot of crummy dialogues, undistinguished performances and some guns and chase thrown in. What is intriguing is the presence of Kay Kay Menon, Annu Kapoor and Anupam Kher who play characters that require little effort, or imagination. Also, not once does Paandya recoil from anything that might have lifted his film above the routine.

The result is a story that’s as crass as the title itself. Baba (Maniesh Paul) is trying to find his bearings in his hometown Goa, when he gets to know on his 25th birthday that his father Charudutt Sharma (Anupam Kher) — ostensibly a henpecked uninteresting cashew nut dealer — in reality, belongs to a family of hit men since the past 12 generations. He is further shocked when his father declares that Baba would have to take charge as the 13th!

Baba’s girlfriend Angelina (Manjari Phadnis) too, who runs a beach café, has a secret she cannot reveal: Her father Brian Morris (Annu Kapoor). Morris sells fake paintings of masters like Renoir and other greats that his family had inherited, and cons many unsuspecting people. Problems arise when home minister Utpal Shivalkar (Manish Wadhwa) who buys the painting sells it to an art gallery owner Kamya (Natasha Suri), who would have nothing, but the original Renoir. Thus begins a tale of drugs, contract killings and blackmail accounts where ACP Shivraj (Kay Kay Menon) gets embroiled while trying to connect between all the chaos.

None from the cast attempts to breathe life into this inane drama that loses track as soon as it takes off. I don’t usually predict the box office fate of movies, but can’t resist forecasting doom for this one. With a relatively modest budget that takes the cast for some action to the scenic Goa this film is such a monumental bomb that it is sure to get yanked from theatres after a week.