For his first film, Toleti’s brutal take on an industry that is one of the foremost revenue earners of the country is gutsy. 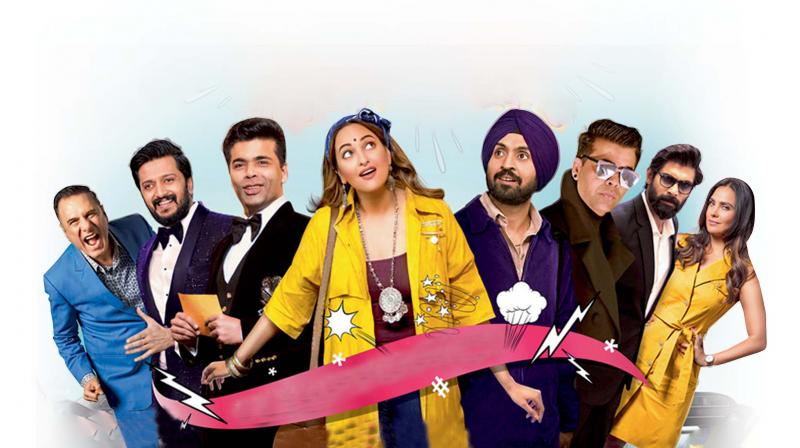 Welcome to New York is a spoof credited to Dheeraj Rattan but this Chakri Toleti film seems to be scriptless. In fact, there are times when you feel that the leads Diljit Dosanjh and Sonakshi Sinha are merely doing what they feel like with precious little effort. Of course, there are two Karan Johars for the price of one, and one of them even tries to look menacing while propositioning Sinha in one of the scenes.

There are also Boman Irani and Lara Dutta, who play IIFA members (yes, apna Bollywood employees), and organise a talent hunt that has two Indians (Dosanjh and Sinha) participate in the show alongside Bollywood luminaries. It’s Dutta’s revenge to get two worst possible candidates who would easily ruin the future prospects of the mega event. Teji (Dosanjh) from Punjab and wannabe fashion designer Jinal (Sinha) seem perfect nonentities to sabotage all chances of the award ceremony becoming globally known.

My question is: In the midst of all the confusion and drama, where is the film?

In the marathon of thumbnail sketches that are haphazardly stuffed, there is actual IIFA footage merged with snapshots of numerous characters in quick succession that may not make much sense but become visually exquisite only because you get enough time to ponder over them.

The film seems to be a collage of titbit cameos passing off as characters. There is also Riteish Deshmukh who gets to mouth some cheeky one liners: “Shah Rukh ko leke toh koi bhi hit film bana le… Mere saath bana ke dekho,” His friendly banter with Johar sounds very impromptu, but it’s not funny. Only occasionally you end up having a few laughs. The film is fast-paced and set against the swirl of some quick developments, may be to make sure that the audience finds it interesting to remain glued to their seats. But nothing seems to be compelling except when Johar starts taking potshots at Bollywood. He doesn’t spare himself too. When one of the Johars gets kidnapped, he screams and threatens with dire consequences. At one point he says, “I’ll torture you with a DVD of Kabhi Khushi Kabhie Gham...”

Sinha doesn’t even look good, only Dosanjh, other than Johar, who has a natural flair for comedy, is thoroughly having a blast.

There are a few loose strands that never get woven into the storyline. In addition to real stars and celebrities, this film also provides glimpses of Zayed Khan, Dia Mirza, Rana Daggubati, Sushant Singh Rajput, Aditya Roy Kapoor and many others. There are Salman Khan and Katrina Kaif playing themselves, who like everyone else are as clueless about what’s going on in the film.

For his first film, Toleti’s brutal take on an industry that is one of the foremost revenue earners of the country is gutsy. At places it also seems to be handled with kid gloves, but unenjoyable beyond a few chuckles!

Wonder what the producers had in mind when they decided to pump in money? It is clear that a mere germination of an idea while on a holiday trip to one of the IIFA destinations could not go beyond planning over drinks and other goodies!