The story (if there is a need to name a series of impromptu gags as a proper tale) isn’t as flimsy as it sounds, right from the get-go. 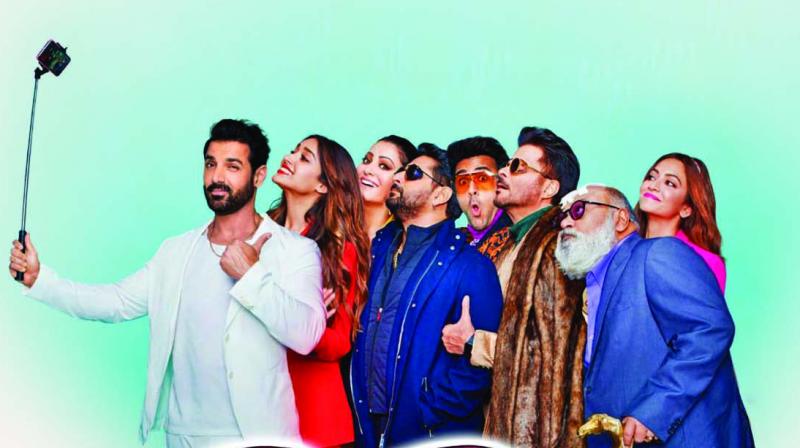 The film trusts its audience to infer its emptiness and no-brainer attitude.
Rating:

It must be quite a task for anyone to kickstart a film project with mega stars in attendance and not know how to go about making an entertainer. But then, if the producer is more than willing and the cast is all agog to be part of such a show, who wouldn’t risk it? In other words, it’s quite understandable that director Anees Bazmee would be clueless about parading dumbness with such zip and helm in a film like Pagalpanti without a script, and pass it off for a clever marketing gimmick.

Perhaps the title seems quite apt to suggest a comedy that is more pedestrian than one that has any semblance of an entertaining masala film, since Bazmee’s 149-minute movie dives into nothingness right from the word go.

The story (if there is a need to name a series of impromptu gags as a proper tale) isn’t as flimsy as it sounds, right from the get-go. A comedy where there are three men, considered as losers in their lives by everyone, and who are planning to get rich along with their girlfriends by fooling two gangsters and robbing their money, could well have been a fun ride if there was some proper writing moving ahead with bumbling characters and their misdeeds. One could still have put up with poor writing if the actors delivering them had some persuasive skills to make silliness look credible. What is even more painful is to see the nearly 50-year-old male actors (both John Abraham and Arshad Warsi) trying too hard to add zing to not-so-funny interchanges between them.

There isn’t much to talk about over a storyline here, but just to give you the basic premise — Rajkishore (John Abraham) lives in London, and suffers from saade saati (the astrological seven-and-a-half year long period of Saturn that gives a troublesome time to the individual who is going through it). He and his friends Chandu (Arshad Warsi) and Chunky (Pulkit Samrat) are unemployed vagabonds and end up getting into trouble wherever they seem to go. Rajkishore’s ill luck follows whosoever he comes in contact with. Chandu and Chunky join hands in the firecracker business but it goes bust and in flames. Literally. The three friends then decide to be together and recover their losses. Soon, when another of their major goof ups cost gangster Raja (Saurabh Shukla) a huge loss, he and his brother-in-law Wifi (Anil Kapoor) employ the trio to regain the damage caused.

From there on, the plot starts wearing even thinner, alternating between a slapstick mode and jumping to songs and nonsensical elements (a ghost, a haunted villa, men getting stuck to glue, and so on) and never quite salvaging itself.

The only time you cheer is when sexy Urvashi Rautela appears out of the blue in a sexy item song (“Bimaar mera dil…” a remix of a hit song from the 1980s) and lights up the screen. But it’s only a fleeting moment that is too short lived to register.

It’s rather scary when you realise that an actor of Anil Kapoor’s calibre is trying to play a flashy second fiddle to some lesser-in-age (and otherwise in talent too) actors. But notwithstanding his loud mannerisms, the ageing actor is a spot-on depiction of a certain type of oddity who revels in adding his two-bit to any and every situation he finds himself in. He is the only one besides Shukla who appears to be enjoying himself thoroughly.

The film trusts its audience to infer its emptiness and no-brainer attitude. And so, a filthy rich Gujarati bhagoda (absconder) Neeraj Modi (you guessed it right — it is the renegade Indian Modi who flew out of the country) unexpectedly shows up as Mr Moneybags. The only difference is, unlike the Modi in real life, this one doesn’t have his way, and gets hoodwinked to the extent that he screams, “Itna toh maine India ka bhi haal nahin kiya tha” (Even I didn’t con India to such a degree the way I have been conned). There is no twist in the tale here; just a wee bit of patriotism thrown in to save the film from being completely derailed. And that’s not all. Even a man from Interpol too emerges to make the three unrefined idiots in the lead look like some sort of saviours — just to make us believe that beneath all those layers of uncouth behaviour resides a do-gooder soul not keen to settle scores, but resolve, reconcile and make peace.

There’s no redemption, but does it matter when there’s no sign of anything worth redeeming in the first place? By this time, anyway, one has had enough of soporific scenes with dollops of childish ridiculousness, and one wants to rush out of the theatre.