A must watch to quench the thirst for a ‘real’ entertainment. 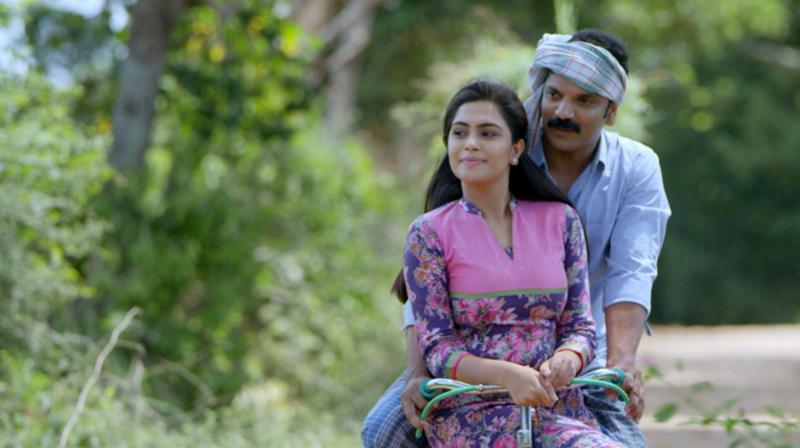 A still from Chambal movie.
Rating:

Chambal came into focus for its alleged connection with the life of IAS officer D K Ravi, who died under mysterious circumstances in 2015. So, does this movie is based or inspired by the life of Ravi, is an answer for the audience to find out by experiencing Jacob Varghese's cinematic version of an upright officer's fight against corrupt system.

Yes, there might be several sequences in Chambal which will dearly remind the real Ravi. However, it is neither a biopic nor any documentary on corruption, as it holds mirror to the real present system through the escapades of the character Subhash, an IAS officer.

It moves like a thriller by holding the curiosity of the audience right till the end, which is where the movie embroiled in a realistic tale earns good appreciation. Unlike the usual heavily armed commercial ventures propelled by tailor-made script and dialogues to glorify the presence of star actors, Chambal keeps it close to reality minus the melodrama.

It also acts as a sneak peek over hard realities of public administration especially aimed at those who assume white collar jobs such as IAS (concerning only honest and upright officers) is a mark of luxury and a piece of cake to handle.

Apart from the natural performances led by Sathish Ninasam, Sonu Gowda and the rest of the cast, it is the making and the crisp screenplay which makes it look brilliant in this cat and mouse political-bureaucratic drama.

Insofar as the big question on whether it deals the controversial end of Ravi, the director gives a different version but does it smartly with no directs links to it. A must watch to quench the thirst for a ‘real’ entertainment.