The Extraordinary Journey of the Fakir movie review: Dhanush charms in quite an ordinary saga

Aja sets out on a journey to find his estranged French father after his mother’s (Amritha Sant) untimely death. 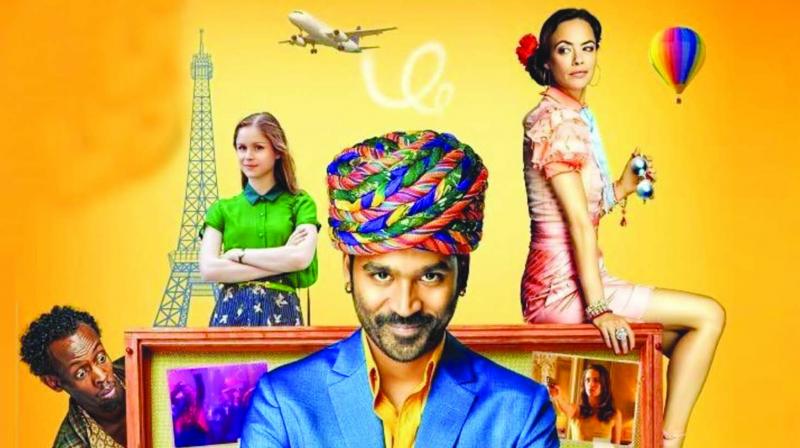 After the stupendous success of Slumdog Millionaire in 2008 that went on to win eight Academy Awards, or the survival drama The Life of Pi in 2012 (it won five Academy Awards), comes the Ken Scott-directed The Extraordinary Journey of the Fakir, an English comedy-adventure film based on a novel by Romain Puertolas titled The Extraordinary Journey of the Fakir Who Got Trapped in an Ikea Wardrobe, originally written in French.
Rating:

Spices and spiritualism may be the best-known Indian exports to the West, but in essence, it is Bollywood as an import from our land that interests most occidental filmmakers. More so in Hollywood. The interest in the song and dance formula one got a glimpse of in some of the events organised by both Bollywood and Hollywood, have piqued filmmakers’ curiosity, who it seems don’t look at them as an oddity anymore.

After the stupendous success of Slumdog Millionaire in 2008 that went on to win eight Academy Awards, or the survival drama The Life of Pi in 2012 (it won five Academy Awards), comes the Ken Scott-directed The Extraordinary Journey of the Fakir, an English comedy-adventure film based on a novel by Romain Puertolas titled The Extraordinary Journey of the Fakir Who Got Trapped in an Ikea Wardrobe, originally written in French.

If one has paid attention to the title itself, one would instantly also assume an unusually remarkable journey of a man that would make viewers sit up and brace themselves for an exceptional ride. While the trappings that embellish the journey are fine and entertaining, one keeps looking for the “extraordinary” bit that remains elusive throughout. That is not to say that what the lead protagonist Ajatashatru Lavash Patel (Dhanush) experiences isn’t uncommon — it is short of quite a miraculous escape for a boy who has lived all his life in a small Mumbai neighbourhood but goes on to tricking people with street magic and fakir stunts.

Aja sets out on a journey to find his estranged French father after his mother’s (Amritha Sant) untimely death. The task looks arduous, but he is obviously also excited to be exploring a new world on his own, oblivious to the never-ending adventure he gets dragged into.

Back home in India, he has always had it easy as a street magician and trickster for whom it had always been easy to make people believe that he possessed special magic powers. And a fake Euro 100 note doesn’t seem to be an impediment to his grand plans either.

Not in the least dazzled by the hypnotic world of Paris he sets foot on, life looks welcoming for him. When he runs into Marie Riviere (Erin Moriarty) in a furniture store (the name Ikea is smartly omitted in the 100-minute film) cupid strikes and the two get attracted to each other almost instantly.

From then on, it is karma and chance that play the most significant role in Aja’s encounters in a series of wide-ranging adventures around the world, first in a wardrobe to London, and then, in a Louis Vuitton suitcase to Rome, and finally, in a hot air balloon to Tripoli. Along the longwinded journey he undertakes, his genial behaviour pleases all, and all the men and women he befriends — be it the Sudanese illegal immigrant Wiraj (Barkhad Abdi) he meets on the way to London, or a distressed actress-diva (Bérénice Bejo) he does an impromptu Bollywood jig with — help him discover the joys of life even when he is dubbed a refugee in London.

There’s too much of a feel-good factor working to enhance the film’s credits underlined in the title itself. The premise of such a chronicle that goes beyond the familiar depiction of a poor Indian is thrill-seeking, and unfolds organically, though the situations are most contrived. Many of the characters and circumstances are included only to make the tale look inspirational, and Aja’s account may be incredible, cinematically they don’t translate into outstanding descriptions or interpretations.

What works for the film is Dhanush’s unusual charm. As ordinary-looking but delightfully pleasant nevertheless, he is one star whose “heroic” appeal is unconventional. And, he makes good use of it.

If you are tired of hearing sob stories of a good guy’s plans in a foreign land gone awry — and such yarns abound in the world — this one is certainly stirring. How one wishes the film itself was also one!