Rohit Shetty is back with the fourth instalment of Golmaal franchise, titled Golmaal Again. 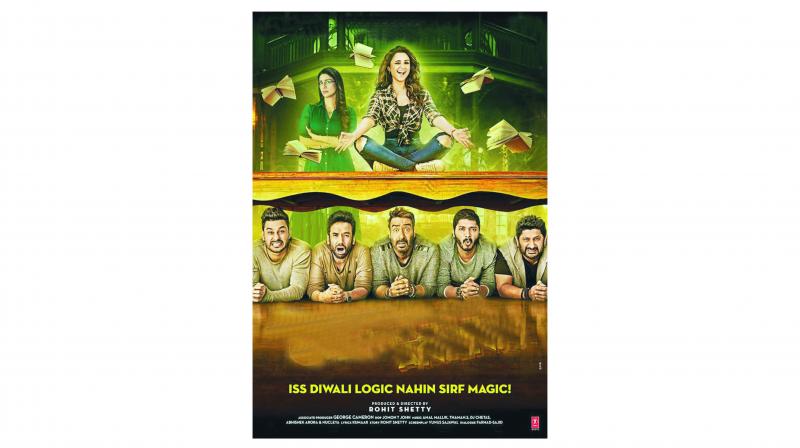 Rohit Shetty is back with the fourth instalment of Golmaal franchise, titled Golmaal Again. All the central characters — Gopal (Ajay Devgn), Madhav (Arshad Warsi), Lucky (Tusshar Kapoor), Laxman Prasad (Shreyas Talpade) and Laxman (Kunal Khemu) and two additions, Tabu and Parineeti Chopra — are nicely nasty, and, as is expected, go over the top in this deceptively-horror-but-comic yarn that gives the film an ominous edge. Shetty knows his audience too well to strike a false note — and time and again he has proved it too in the past (Golmaal, Singham, Bol Bachchan, Dilwale) — and gives his fans a festival bonanza that decks the theatres with absurd expectations and some familiar suspension of disbelief. Perhaps, that’s the reason why the cartoonish air throughout in the film supported by background music enables grimly wacky to be more impactful without straying into bad taste.

Taking off from their earlier roles, all five are seen reprising their roles once again in rich philanthropist Jamnadas’ (Uday Tikekar) orphanage in Ooty where they grow up into troubleshooters and create chaos at the slightest given opportunity. God has been kind to them since not just these five young men, all the other inmates too, have led a cosy life at the children’s home until a builder named Vasu Reddy (Prakash Raj) and Jamnadas’ nephew, a real estate tycoon Nikhil (Neil Nitin Mukesh) con Jamnadas into turning the property into a lucrative venture. Their avarice would make them do anything to dislocate the children, grab the land for personal gains, and even commit two murders. There’s also an adjacent bungalow that belongs to Col. Chouhan that they have set their eyes on. Unbeknownst to the five, the house is haunted by a ghost, and as they begin to have an encounter with it, the terrified lot runs into an unending cycle of silly, juvenile pranks to keep the action going. Enter Anna Mathew (Tabu) who has been their companion for long but conceals more than she reveals even as she tries to ward off evil and keep the spirits out of their way.

The subplot that involves a murder and subverts the genre deliciously adds quite an irrational and outlandish twist to the proceedings but gives us three characters — Sanjay Mishra, Mukesh Rishi and Johny Lever — joining in with their goofy drive creating confusion.

Trying to reinvent a new genre of comic horror, or perhaps, horror-comedy, Golmaal Again has its moments and should please those that seek it out. Not so much the script, but it’s the performers mostly, who, though saddled with poorly conceived scenes, are left with their timing and skilled talent to lift the sagging spirits. What’s good is the way that both screenwriter Yunus Sajawal and the entire cast demand that you stay invested in paper-thin characters as they proceed to terrorise each other and/or ineffectively strain against a parallel track of forced humour thrown in, though every possible contrivance is thrown at viewers, from ghosts flying to ghosts coming back to avenge an unfinished agenda. This film is meant for all those who don’t bury their heads into the serious. If you don’t go there so much as a purist but rather as someone who enjoys a good jolt and moderate comedy, this is well worth catching. In the bargain, the appearance of baddies who manage to always act slower than the good guys is untimely.

Mention must be made of Tabu, always cast in serious roles and seldom in light-hearted avatars, who is quite a revelation here. Piercing her gaze into co-stars antics, she seems to be delightfully over-the-top whenever needed, and is, at times, a perfect foil to the overdramatic lines that her co-actors deliver. Khemu, Warsi and Talpade are squabbling as usual and each one of them is allowed enough screen time to add punch to their lines to leave their mark. With no caution advised, it carries on hinging on once-incongruously horror and once comic by turns, to alternate between the two forms. But by no means, it infuriates you, only because you are not expected to invest in either the cheer or the ludicrous absurdity. Another fun to watch is Devgn, who sheds his all-knowing demeanour to a funnily created man’s role of a mortally afraid of the dark man latching on to Talpade for support.

But because the writing suffers and barring a few moments, there aren’t too many scenes that stand out, the 151-minute film is cranked out as a generic mash up of some of the scenes from the earlier films of the series. Still, I found the film being played out to pleased squeals at the theatre with some even rolling with laughter.