Sanjay Dutt is back in a role that seems to be tailor made for an actor of his age and experience. 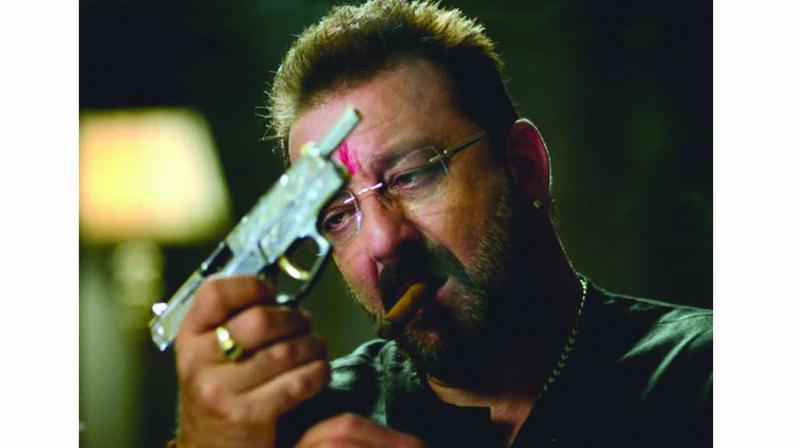 Sanjay Dutt is back in a role that seems to be tailor made for an actor of his age and experience. Reprising a character, the original of which won the National Award, could be tough.

This week, wedged between two mega releases — The Zoya Factor and Pal Pal Dil Ke Paas — is the political drama Prassthanam that has Dutt essaying the role of a politician whose grand ambitions and soft corner for family and tradition — both his own and his political — rule his life.

Produced by Dutt himself, and directed by Deva Katta, who also helmed the original in Telugu, this drama has all veterans playing aged roles, albeit pivotal ones. As Baldev Pratap Singh, Dutt, who is a four-time sitting MLA in a district in Uttar Pradesh, is torn between family, ambition and personal choices. When he becomes the patriarch of his family following his father’s (M.K. Raina) and elder brother’s (Anup Soni) murders/deaths, he assumes power, not just of his family’s but also inherits his father’s constituency to follow in his footsteps. His duty-bound self also insists that he marries his brother’s widowed wife (Manisha Koirala) and adopts her two children.

All seems finely orchestrated with his rising power and growing political presence. Then his son Ayush (Ali Zafar), the one that is his brother’s, and the other, his own — Vivaan (Satyjeet Dubey), are pitted against each other in political upmanship. The older Ayush keeps his head on his shoulders and gets groomed to take over his father’s legacy while the younger Vivaan is impulsive and hot headed and dreams of taking charge of their family-run game of politics.

What follows is the same old formulaic routine — killings and revenge and counter killings. As one after the other characters are bumped off, you try and figure out who convincingly carries forth his or her character with a fair degree of élan and persuasive skills, and does not ham or overdo.

This remake has its basic premise intact from the original of the same title, but looks dated with power hungry sons and politicians — not to forget the goons in attendance — readily taking orders from their bosses that is reminiscent of the 1980s films. In the midst of all this, there are cops too who collude with powerful leaders.

But none of the characters in this 142-minute film, barring Ayush as the level-headed man and Vivaan, as the power hungry son, justify themselves with their sudden turnarounds. If Dutt vacillates between his sense of right and wrong, Shroff as the loyal driver-cum-henchman, is too subservient or vindictive towards the end. Koirala too suffers in an ill conceived role. Anyway, with so many sudden twists in people, the overall quality of the film dwindles, and you don't comprehend the complexities of their minds.

All the veterans in the cast fail to make an impact. It’s the younger lot of actors — Kamini Khanna, and particularly Ali Zafar as Ayush and Satyajeet as Vivaan who use every opportunity to outshine the others, and get into the skin of their roles. So powerfully impressive the latter two are that you wonder whatever happened to Koirala, Shroff, Raina (in a tiny role though) and Dutt himself.

It really is sad since this film had the potential to be liked by the masses had it been handled with care!