Manoj Pahwa too, looks wasted in a role that could have gone to any actor who wanted to be a part of this ensemble cast. 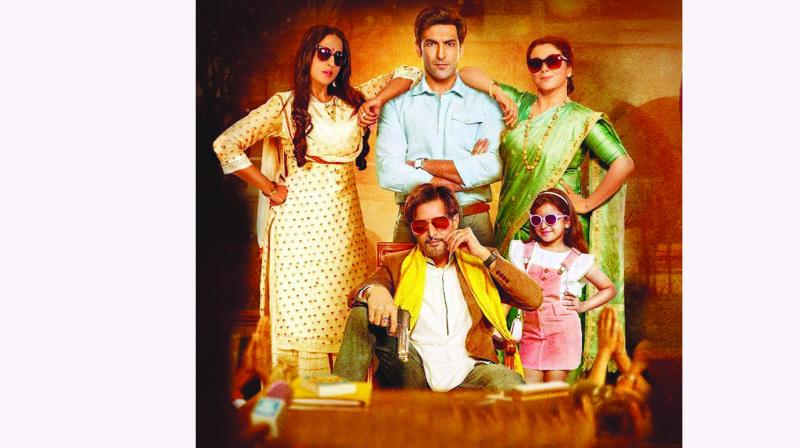 The problem with Family of Thakurganj is not the cast — which is excellent — but its insubstantial material with which the makers set out to achieve the impossible — a cohesive, believable film that knows precisely where it is headed.
Rating:

A poor family based in a small town of North India, Thakurganj — two sons of the same set of parents — one upright and virtuous, and the other wicked and immoral (let’s say Ram and Shyam which are monikers often used as metaphors in Hindi films to illustrate the good and the bad) — a bunch of goondas always ready to take orders and bump off men at their boss’s behest; a corrupt politician and the presence of police personnel completing the nexus between the law breakers and the law enforcers, and you have a film called Family of Thakurganj. It isn’t unusual to sit through a film that has confrontation and love as ingredients — what is a must have is a plot and a narrative that keeps us engaged. Directed by Manoj K. Jha, the film, despite some dependable names such as Jimmy Shergill, Manoj Pahwa, Saurabh Shukla, Yashpal Sharma, Mukesh Tiwary and others, this is a film that tries to give us an altered version of a tale that is not just hackneyed but begins to test your patience in its 127-minute runtime. Even if you are not overly concerned about substance, this one is just a mind-numbing good versus bad drama revolving around gangs and gangsters.

Brothers Nannu (Jimmy Shergill) and Munnu (Nandish Singh) are like chalk and cheese. Obviously, one of them has to be supported by one of the two parents and mother (Supriya Pilgaonkar) doesn’t think twice before encouraging them. Nannu is immoral while Mannu is all morally righteous.

After the opening scenes, and even after many of the multiple characters have been introduced till the interval, your expectations begin to rise as many of the constructed scenes start resembling Tigmanshu Dhulia’s well-constructed narratives in his gangster films. Nannu looks up to his mentor Baba Bhandari (Saurah Shukla) for every small little job that he is entrusted with, but has to contend with another protégé Badri (Mukesh Tiwary), whose ambitions match Nannu’s. Nannu wife Sharbati (Mahie Gill) looks like a control freak who even offers advice to him on matters she doesn’t have a clue about. Why and how on earth — a man like Nannu — who can be at times be ruthlessly lawless — would give in to his scheming wife’s demands remains unexplained. There are abrupt and inexplicable interjections where characters alternate between being good one moment and showing signs of evil intentions in the next instance.

Nothing really takes place in terms of a storyline even as writer Dilip Shukla rehashes old movies to give us a glimpse of the influence of crime on modern society and on traditional values in a typical family that dotes on relationships.

The problem with Family of Thakurganj is not the cast — which is excellent — but its insubstantial material with which the makers set out to achieve the impossible — a cohesive, believable film that knows precisely where it is headed.

Just when you want to know what may be in store for you and wonder whether to make heads or tails of the film, a few actors spring a surprise with their histrionics. But by then, it is too late to feel invested in the drama that follows. Even when Shukla, who infuses each of the scenes with heft, and showcasing his strength, his masterful strokes, one doesn’t know what to make of them. His sudden flying of the handle in whichever frame he appears in is completely out-of-sync with what the rest of the film seems to be leading to. Almost towards the end, the role of a police inspector (Pavan Malhotra) looks more like an extended cameo he sinks his teeth into. Manoj Pahwa too, looks wasted in a role that could have gone to any actor who wanted to be a part of this ensemble cast.

There are far too many shots being fired in the climax for you to wake up from your slumber, but with so many gunshots killing so many people, the wounds seem to be inflicted more on the audience than on the goondas.

My piece of sound advice to you: Avoid!