As a result, all that begins as a promising start soon peters out in the middle into a dismal script that goes all over the place. 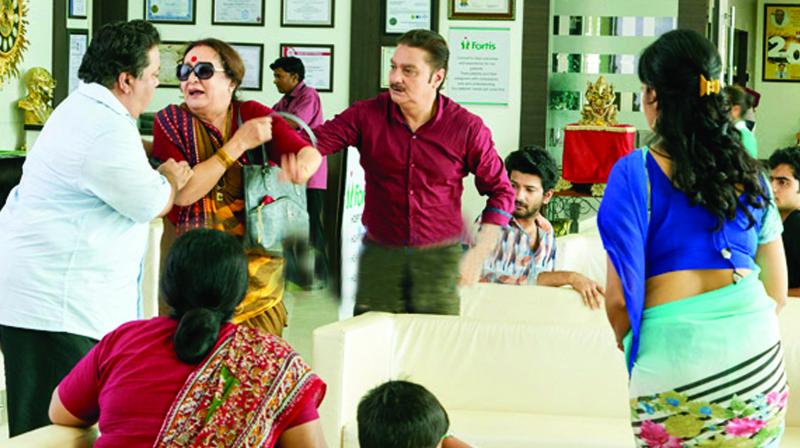 Our middle class values once again are at test this week in debutant director Harsh Chhaya’s Khajoor Pe Atke. The premise is perfect: a patient about to kick the bucket and is admitted to the ICU in a Mumbai hospital where expenses mount every hour, so does anxiety writ large on tension-filled faces, which are more concerned about the futility of a lifeless body that might depart any moment.

Chhaya also gathers some of the finest actors who are remembered for their fresh appeal in numerous roles they have enacted in Bollywood. So there’s Manoj Pahwa, the underutilised Seema Pahwa and Alka Amin, Vinay Pathak and Dolly Ahluwalia as family, who park themselves in a hospital the moment they get to hear the comatose condition of their close relative.

Their concern is not so much about the ailing brother Deven. While Ravinder (Vinay Pathak) frets about a business deal, his older brother Jeetu’s (Manoj Pahwa) wife Susheela (Seema Pahwa) is worried about the expensive plane tickets that would cost them a bomb. Their sister Lalita (Dolly Ahluwalia) shows fake concern too but gushes about the miracles that her godman could bring about in such trying moments. Jeetu and Sushila’s daughter Nayantara (Sanah Kapoor) is least agonised about her uncle’s plight or his family’s troubled situation; she is keen to come to Mumbai to try her luck in films. For all of them, the Mumbai trip is either a burden or a dream come true where some male members see it as an opportunity to explore the big bad world of dance bars and their dancing women who look game for anything.

Our togetherness that’s so often becomes the leitmotif in many Indian films, and this film too, is no exception. Banking on close kith and kin has always been the most cathartic way to fight any tragedy in this part of our land. In fact, right from Aditya Chopra to Karan Johar and Sooraj Barjatya to Mahesh Bhatt and even Imtiaz Ali and Farhan Akhtar have often emphasised the need of family and their support in our cinema. And therefore, in Chhaya’s dark comedy too, the news of a brother’s ill health triggers an instant reaction from all near and dear ones who are seen rushing to the hospital in Mumbai where the patient is admitted. Soon the lounge of the hospital turns into a cozy place for a family reunion even as some of the young make elaborate plans of going out to have some fun on the side, while all along reminding one another of their reason to come all the way to be with their uncle who is apparently battling for life.

As each relative’s self-serving motive gets more and more exposed, the wife Kadambari (Alka Amin) tries to drown her tragic moments by consuming pastries and ice creams throughout the time she waits in the lobby, only because she knows no other way to help handle the crisis. Within no time, the anxiety-ridden predicament leads to another crunch when the relatives start finding out details of their ailing patient’s bank details and his investments. The mounting hospital bills are on everyone’s mind, but not on their lips for the fear of getting judged wrongly.

Chhaya, who has been a competent actor, had a winner on his hands with a good ground for an enjoyable fare. He has also managed to cast some good actors who have time and again proved their track record. But did he just leave them with their talent to perform the way they pleased to? At least that’s what it seems when one finds Ahluwalia (who was brilliant in Shoojit Sircar’s Vicky Donor, and even won the National Award for the Best Supporting Actress) overacts almost in every scene. Both Manoj and Seema infuse their roles with their natural ability to get into the skin of their characters but have little support from writers. Only Sunita Sengupta, who plays Pathak’s wife, performs her role the way she ought to have but her role is too inconsequential to get noticed at times.

As a result, all that begins as a promising start soon peters out in the middle into a dismal script that goes all over the place. If only Chhaya gave us circumstances that progress naturally as a result of people’s greed and selfishness while dealing with heart-breaking and unfortunate moments, many scenes would have turned out truly memorable. Instead, there is forced laughter and exaggerated expressions of hamming actors to let us into an obligatory comic mode.