Mishra has always played the middle class man’s angst and his predicament with ease. 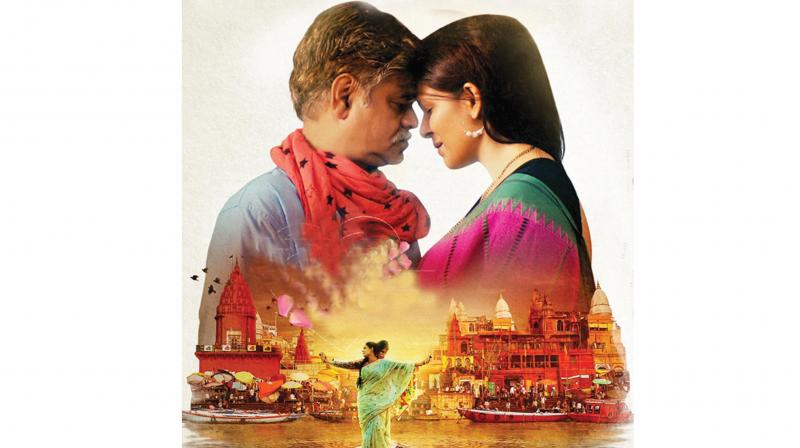 One could find endless stories about the careworn Indian middle class that’s perennially surrounded by the dichotomy of the fast changing world around its traditional mores. Not just the extinct values and lessons on morality that every older generation tries to thrust down the throats of the young, there are other practicalities that need to be followed. More often than not, one struggles with several of these alterations, and every other freshness that the winds of change often demand from all of us.

For a writer to look at the complications that our pluralistic world abounds in, a closer in-depth analytical, even it means looking at them gently is something that would engross the viewers. The understated delicate writing must never look casually into such grave situations or else it will fall flat.

Angrezi Mein Kehte Hain is a romantic drama film about three couples and their distinct viewpoints on the concept of love. Directed by Harish Vyas the film has an interesting cast: the ever dependable Sanjay Mishra, the immensely gifted Pankaj Tripathi, who all become part of yet another reliable bunch of actors — Brijendra Kala, Ekavali Khanna, Anshuman Jha and the scene-stealer Shivani Raghuvanshi (remember Ankhon Dekhi and Titli?).

Yashwant Batra (Sanjay Mishra), who lives in Batra Niwas in Varanasi, is not exactly shy, but is the quintessential chauvinist for whom expressing love to his wife Kiran (Ekavali Khanna) is not necessary — after all, he seems morally right, and honour-bound too. Sadly, he is not even aware of his shortcomings, and is rather pleased to have performed his duty religiously as a father and husband without so much as bothering to find out what his family really demands. For him, as long as his lunch gets packed every morning before he leaves for his job at a post office, and gets the mandatory ice ready for his evening drinks, he seems to be contended. There is nothing exciting about his loveless marriage, and neither Kiran nor his daughter Preeti (Raghuvanshi) shares his outdated viewpoint, and look most displeased. As the changing times would have predicted, the huge ancestral home begins to see many cracks that would lead to the three leading stressed lives.

When his wife finally lets him know that he is incapable of comprehending the complexities of a relationship in a marriage, or reluctantly tells him that he doesn’t know what love stands for, he is startled with his ego bruised and hurt. He is not too happy at workplace and remains an underachiever. And now with just four years to go for his retirement, he seems to be turning all the more irritable in the domestic environs of his home, where to keep him going, he probably has some freedom, a modicum of hope and heaps of sense of self to lord over his family.

But all is not lost, even as Kiran decides to separate from Yashwant. A chance encounter with Feroze (Pankaj Tripathi) for whom Yashwant delivers a package, turns an inspiration for him. Feroze is a doting husband to his ailing wife Suman, and soon Yashwant is a changed man. His daughter Preeti and her husband Jugnu (Anshuman Jha) too egg him on to try and look for newer meanings into love for which he needs to undergo a drastic change in his attitude.

As the film suddenly shifts gears and becomes a somewhat tame comedy, the lighter moments fail to grip one’s attention, and the actors seem to have scant regard for the genre of the film, which looks as confusing as the actors themselves.

Overall, it becomes a failed exercise to follow Yashwant’s realisation that loving alone is not the key to a healthy relationship; it is as much about expressing it appropriately too.

Mishra has always played the middle class man’s angst and his predicament with ease. There are moments when he, along with Tripathy and Raghuvanshi, lifts the film way above the unexciting pace that it drifts into. Tripathy, in particular, showcases his sensitive side as he gets into a character, which seems hanging on to the last breath of his wife with less hope but everlasting passion. Raghuvanshi too has an ace up her sleeve every time she plays the ordinary, conventional but spirited young Indian girl’s role.

What lets them down — and viewers too — is the insight one would have expected the director and writers to look into, to allow us an understanding of why middle-class values that many of us are so proud of, are quite obsolete, and, should pave way for the new!