What fails to ignite the audience’s interest is the half-baked residue of a film that you are served. 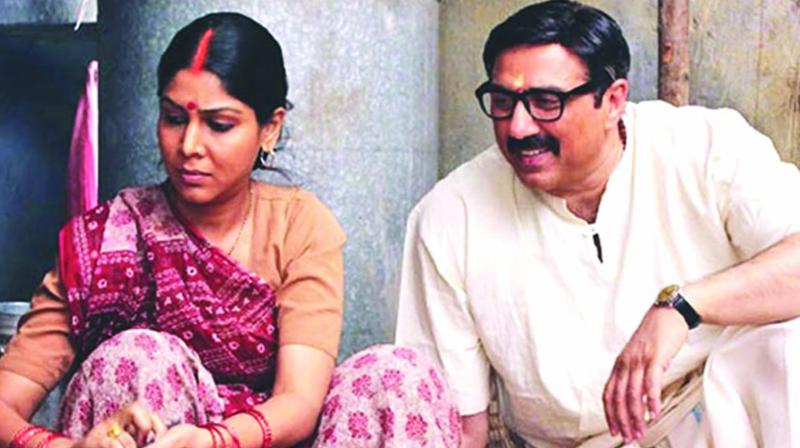 There are films that stand the test of time, more because of the content than anything else. As the aware lot of citizenry relates to such films not just from the prism of a conscious inhabitant, but also from the perspective of a contemporary individual, the embers of an historical incident begin to stoke the fire that resides within. I am referring to the demolition of the 16th-century Babri Mosque in the city of Ayodhya on 6th December 1992 in Uttar Pradesh, which occurred after a political rally at the site turned violent. Dr Chandraprakash Dwivedi’s latest film Mohalla Assi is based on Dr Kashi Nath Singh’s popular Hindi novella Kashi Ka Assi, which was a satire on the commercialisation of the pilgrimage city, and fake gurus who lure the foreign tourists. Though the extended delays in its release were attributed to the allegations of non-payment of dues by the director, there was more that allowed the completed film to rot in the cans. Obviously, politics played a prominent role in stalling its release. Sadly, it all resulted in the film getting a quiet online release a few years back. And, now, in 2018, the released film reveals more than it conceals about the surrounding controversy. With several cuts dictated by the CBFC (Censor Board of Film Certification), it probably is a pale adaptation of what the author must have experienced and penned nearly two decades ago. While watching the film, there are various aspects to the Varanasi of 1988 that may still pique your interest; what you would never fail to notice is the fact that the present day scenario in 2018 is not too different. And that, I feel, is the strength of the film!

I haven’t read the book, but I am drawing my conclusion after watching a rather butchered 120 minute version of the original 150 minute film that has been mired in controversy ever since it went on the floors in 2011. The edited thirty minutes must have been an uncomfortable watch for the powers that be. Also, the jagged edges in the narrative, marked by sudden cuts that mar the overall effect of a scene, are an obvious dampener, besides being irritating enough to make you feel cheated.

C’mon, Mr Joshi, we have fought three Lok Sabha elections ever since then and distanced ourselves comfortably from the occurrence that shook the nation!

Set in 1988, the film begins on the Assi Ghat in Varanasi on the banks of the Ganga, where the historical ‘Mohalla’ (locality) on the southern end of Banaras forms the backdrop. The occupation of most of the motley mix of residents is dependent on the firangi tourists for whom anything Indian is spiritual and leads to moksha (salvation). There are local residents (a great bunch of supporting cast comprising Mukesh Tiwari, Rajendra Gupta, Mithilesh Chaturvedi and others) among whom a lawyer, Kanni (Ravi Kishen) a street-smart peddler of Indian exotica, a rabble rouser and others are forever engaged in discussions centering around the city’s rise and fall at a tea stall, but mostly deterioration.  There is Sanskrit teacher Dharam Nath Pandey (Sunny Deol), who moonlights as a part-time priest, and many other pandas seeking customers on the banks of the Ganges. A puritanical Pandey and a bunch of like-minded supporters subscribe to the Hindutva agenda and are clear about the backing the mosque’s destruction by Hindus, and even joins the march to Ayodhya to prove his solidarity with the Kar sewaks.

As an ardent supporter of Ram Janmbhoomi, he is behind-the-times, loves Sanskrit as a language, is also a self-confessed Brahmin, who would never rent his house to foreigners or people of lower castes, and what’s more, would not allow his daughter to join computer classes. His wife Savitri (Sakshi Tanwar) on the other hand, is frustrated, and amid all her grievances that revolve around their meager income, is someone who stands beside him. Soon, Pandey, the one to protect the city’s sanskriti (culture) and parampara (tradition) is swept off his feet when the winds of change begin to deprive him even of his job as a teacher.

The book that released in 2004, covers many of the political bigwigs trying to hog centerstage, and, so, there are not just passing suggestions but out-and-out references to the Mandal Commission, the Babri Masjid demolition and the 8th PM of India Chandra Shekhar, to name a few.

There are places where I marveled at the sheer audacity with which the snip of the film censorship scissors got passed, though there are several places where you also get the feeling that you are viewing a much watered-down version of some contentious scenes. Thanks to the court order that gave the film its clearance, you feel both pleased and deceived at the same time.

The film tries to adapt from the book faithfully to remain authentic. To prove the coexistence of the sacred and the profane, liberal use of swear words are used, particularly the one that man and women seem most comfortable with, and are supposedly every resident Banarasi’s comfort zone. What jars is the add-on expletive to every line with much effort by nearly all the characters. Clearly, for actors to get the hang of such profanity in every dialogue they deliver there should have been more ease on their part, which is sadly missing.

Otherwise, the film boasts of great performances. Tanwar remains one of the very few most under rated and underutilised actresses of our times.  Internalising the inner conflict of a married woman who goes about doing her domestic chores unquestioningly but loves all that any woman her age would demand, she never lets you wander your gaze from her- so captivating she is. Deol has seldom attempted this genre of acting, and, unsurprisingly, he takes time to get the tone and the tenor of the narrative. Kishen seems to be enjoying himself in a role that is not too demanding. But to be fair to him, he doesn’t overdo even once.

What fails to ignite the audience’s interest is the half-baked residue of a film that you are served. Loaded with evocatively telling lines, this could have been a winner all the way, and you are only left wondering why it couldn’t serve you more!