Namaste England, which uses the same template of 2007 hit Namastey London, is forced and takes the audience for granted. 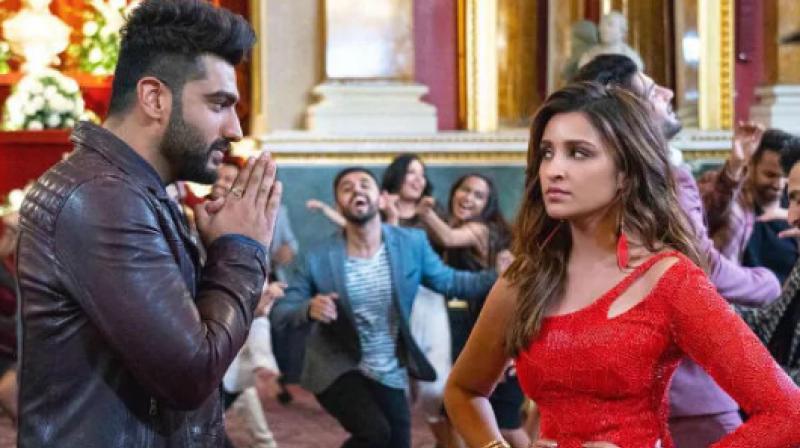 Namaste England, which uses the same template of 2007 hit Namastey London, gives you a feeling of deja vu in a not so pleasurable way. You know exactly what’s going to happen next, yet you refuse to give up on it until it's all unbearable. The Vipul Shah directed romantic drama featuring Arjun Kapoor and Parineeti Chopra evokes same sentiments. This film tries for everything that a attractive Bollywood romance should have: good–looking young couple, picturesque locations, perky dialogues, song-and-dance and what not. But this 135-minute movie is the latest example of makers’ futile attempt at encashing popular movie brand.

Playing on tunes of any regular Bollywood potboiler, Namaste England is love at first sight for the hero (Arjun Kapoor) who is convinced that he has met the woman (Parineeti Chopra) of his dreams in a snap. Without much difficulty, Param (Arjun), a country-loving desi farmer and Jasmeet (Parineeti), a woman of aspirations get married. Jasmeet succumbs to traditional viewpoint of her orthodox grandfather and brother that women should be limited to kids and family. Param, being a supportive husband tries to convince her grandfather to let her live a life of her choice. However, as a twist in fate Jasmeet makes her way to London leaving Param behind in shock and feeling betrayed. Will their marriage survive?

The biggest shortcoming of Namaste England is that it is neither a compelling tearjerker nor an epic romance. It's a film with no heart, no sense, just a series of orchestrated, contrived scenes, augmented by the odd stale romantic lines. The film itself is so confused that it doesn't even bother to construct a buildup to the climactic moment. In the time where Bollywood is opening up to experiments to bring out the best of cinema, this movie is still stuck in the 19th century to show hopeless romantic romeos with over-the-top sentiments which is anything but real life! With Parineeti's character, the film tries to be progressive, but instead of actually being progressive it reinforces the same old idea of Hindi romantic film heroine with ostentatious modernity.

Arjun is sincere, but there is nothing fresh about his goofy, gentle-giant guy avatar that we have seen before. Parineeti, who is styled impeccably and looks lovely, lacks gravitas. There is glossiness instead of authenticity to both her character and acting. The chemistry between the two is decent enough though. They seem like a natural fit together and though you have seen similar girl-meets-regular boy love stories before, the actors breathe life into a jaded story.

Vipul Amrutlal Shah, who also directed Namastey London, doesn’t lift off the screen with this one. His direction is vintage and it is devoid of any novelty or freshness. The film is fast-paced but is not that good to make us miss the absurdities of the screenplay which is pale and predictable. The film is easy on eyes thanks to the beautiful cinematography. The music is forgettable.

With poor-plot, banal lead characters and overall nothing really interesting, Namaste England is a romantic-comedy that falls short on both accounts. The film had the potential to be a real crowd pleaser, but it feels forced, confused and takes the audience for granted. It is better to say good-bye to this one.