The Ghazi Attack movie review: The script gasps for breath 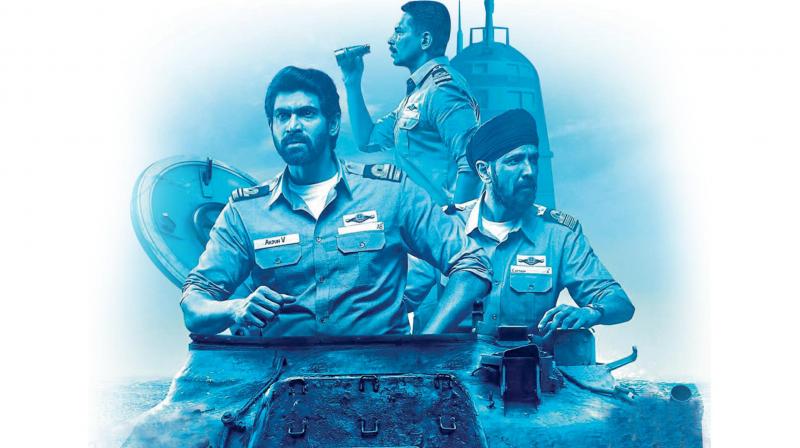 A still from the movie The Ghazi Attack
Rating:

Thanks to mindless television rhetoric that a section of viewers finds as the unalloyed naked truth, the political football between India and Pakistan kicked back and forth in the past two decades has only been more of a flag bearing, chest-thumping variety, with facts remaining indistinct. A few historical accuracies never come to the fore, save, perhaps to earnest history students. And, successive governments’ attempts to throttle the enraged voices that emerge once in a while and die out too, seldom realise the importance of their historical chronicle that could raise its ugly rear head many decades later. In our history books, the 1971 India-Pakistan War continues to outline the bare facts that tell a story, whose official authentication or the then government’s authoritative report serves as the informational document that highlights only the superficial: several details lie suppressed, hidden and thus forgotten. But what led to the war was the Pakistani submarine called the PNS Ghazi that ventured into Indian waters with the ambition of destroying the INS Vikrant. The Ghazi Attack attempts to reveal that!

Based on the mysterious sinking of PNS Ghazi during the war The Ghazi Attack is about an executive naval officer of the Indian submarine S21 and his team, who remain underwater for 18 days. It explores the mysterious circumstances under which the PNS Ghazi sank off the coast of Visakhapatnam, while the Indian ship escaped with only a fatality.

It would be of immense interest to anyone with even some basic interest in such a history to find out what stopped these men? Or who were the heroes aboard the Indian submarine S21? It was the war we know little about. Thus, when a mission to counter attack a senior officer’s operative unexpectedly results in the discovery of an imminent, terrifying threat, an elite team of highly trained Navy officers must immediately embark on a heart-stopping secret operation, the outcome of which will determine the fate of all.

Although the on-screen content of such a subject steers clear of the political firestorm, that won’t keep the film from being dragged into the fray. Thankfully, there’s very little political commentary here, and yet, to be apolitical about a subject like this is, indeed, to be political. Still, to be fair, no actor is cast as Prime Minister Indira Gandhi, firing off secret instructions; there is nobody to question the selfless heroism of the naval officers involved; and the casualties of the attack who deserved a more honourable tribute, have not been ever remembered even as an afterthought. Even when embodied by a cast that includes a rather miscast Om Puri; Rana Daggubati as Arjun Varma; Lt. Com. S21; Kay Kay Menon as Captain Ranvijay Singh; Atul Kulkarni as Devraj, Executive Officer, S21; Nassar; Rahul Singh; Milind Gunaji director Sankalp Reddy’s screenplay has a hard time carving out distinctive characters from all the hunky warriors. Some of the gun battles are protracted, but that’s probably to highlight a point than focus on any actor’s star charisma.

Some acts of valour combine stunning combat sequences, up-to-the-minute underwater technology, and emotion for the ultimate action adventure film-showcasing the skills, training and tenacity of some of the greatest action heroes.

What could possibly bring viewers to a film like The Ghazi Attack is its attempt to inject some real-world grit into world of naval officers and its depiction of the deadly 1971 attacks on the Indian Navy. With so much fact, where is the place for fiction, you may ask. And that’s precisely where the film falters. Some over-the-top acting and text-bookish screenplay are extremely wanting in in-depth characterisation and even an engagingly taut writing.

Director Reddy’s strong strain of Indian patriotism vis-à-vis Pakistan’s in The Ghazi Attack is a straightforward action-thriller that never pretends to be anything other than what it is. But this may not make it a hard sell beyond these shores, and doesn’t work full steam. Actors Kay Kay Menon, Atul Kulkarni and Rana Daggubatti do well in what they always do well: they keep the action at full throttle. But then, that could also be what they all do so annoyingly here, with little variation.